Letter from Adolph S. Ochs Jr. to his family.

Today is the first day that I haven’t worked in weeks. Last week, it was work every night and I was surely tired out. Have four more men in my department now and things will soon begin to run along with less efoort. This morning I slept until 10 O’clock as I badly needed the rest. Am feeling bully tonight and ready for another week of it. Took a long walk in the Bois de Bologne this afternoon.

Mr. Grasty has not yet returned from London. Mr. Selden called up Saturday to say that he had received a cablegram from Uncle Adolph to tell Julius that “all’s well” at home.

Has Uncle Harry ever decided to come over? Julius didn’t mention it in his last letter.

A lieutenant named Foster has been assigned to the Stars and Stripes. He is a friend of Ayers and probably will live with us. Two of us will have to occupy the same room, but it will cut down on the rent and living expenses, so I’m not kicking.

All well here. The news from the front is most encouraging – absolute proof that the American Army has “come through” and is worthy of the confidence that has been placed in it by the Folks-back-home. When I read what those boys are doing up in the lines, when I talk to the wounded back from the front, when an occasional shell falls within hearing distance like a challenge from the Huns – it’s jsut a little hard to stick to a desk. 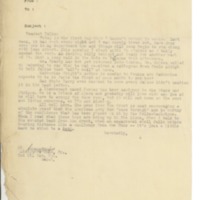