Message transmitted by Harold F: McCormick under authorization. Words are those dictated by Baron Haniel von Hainhausen and reread to him.

I met, at his request, Mr. Leopold Nathan, a German Scientist, living part of the time in Zurich, who offered his services to the German Government early in the war. In the course of such interviews as we had I became impressed with the genuineness of his attitude. Our first meetings were in connection with his interest in my pamphlet “Via Pacis.” I reported these meetings to Colonel House and to the Legation at Berne. Through Mr. Nathan, I was asked if I would see Baron Haniel, who has been in Washington, and who now is officially connected with the German Government, and receive from him a message from Count Hertling. On my answering in the affirmative, Baron Haniel came to Zurich and conveyed to me the message I am now sending by mail. Baron Haniel told me that in giving the message he was speaking for Count Hertling in exact language. He referred constantly to notes of his while speaking.

The message was first given me on the understanding I would endeavor to convey it verbally. I took the notes accordingly. Since then I have been allowed to transpose the notes into a message itself to go by post, on the understanding volunteered by me I would endeavor to go over to America myself, as an individual, to be of whatever service I could be, in its consideration. Otherwise the sending of the message would have been unfavorably considered. A telegram received yesterday by Mr. Nathan from Baron Haniel says the message holds good today.

[This was in the file unopened]

To the President, Washington. 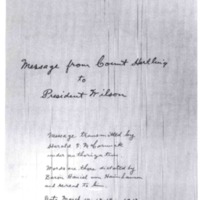