DuBois shares his fear that if the Census Bureau writes a report with no input from African-Americans, it may be biased against them.

I am returning Mr. Sweet's letter to you.

I think this letter is very significant and points to a danger. It means that the work which your race commission would have done is going to be done, to the extent that census figures allow, by the census bureau under presumably entirely southern officers. We may, therefore, expect sometime during 1914 a report with the authority of the Government behind it making every attack upon the Negro race which the figures of the census might be twisted to support. Of course, I may be wrong about this but certainly there is a large possibility. Could we not in some way bring pressure to bear so as to insist upon the participation of some Negro or some friend of the Negro in the preparation of this report? I do not think it would be wise to insist upon my personal participation as I would probably be persona non grata to the director of the census, but it does seem to me that we might bring Mr. Wilson's influence to bear to the extent of having our Association or some colored man selected as co-editor of this work.

If we cannot make any impression on the administration with regard to this report then perhaps it would be best for us to prepare and publish a book on the sociology of the American Negro making it a reference and hand book of present conditions so far as statistical data gives us a basis of fact. I think, perhaps, we might get some publisher to handle a book of this sort which might be used largely in colored schools. 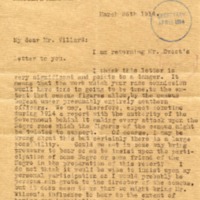