Editor's view on the importance of the economic situation in Britain.

The key to the diplomatic situation in respect to Great Britain lies in the economic and financial situation.

Great Britain is practically bankrupt and its economic condition is desperate. In all high governmental circles there are grave fears of a Bolshevik movement among the laboring classes unless British industry can be rehabilitated soon, and the armies reabsorbed at good wages into the producing population.

British diplomacy at this time seems to be shaped almost wholly by the interest and demands of the financial, commercial and industrial elements.

The country lives off its foreign trade and has been felicitating itself that whatever the cost of the war might be in money, Germany would be destroyed as an over-seas competitor, and hence the account could be squared without difficulty. Suddenly, as the war ends, the United States emerges as an overseas rival more powerful and more to be feared than Germany ever was. Hence the hysteria over the “freedom of the seas”, which is neither more nor less than the ultimatum of the maritime and exporting classes that if the United States persists in building what Mr. Hurley called “the greatest merchant marine in the world”, the American ships must sail under the fiat of the British Navy, and that fiat is to be the law of the sea.

This is a very serious affair, because it touches everybody’s daily bread in Great Britain, and in resisting any restrictions upon the power of the British Navy, the British Government can gain a measure of popular support which it could command on no other issue.

By virtue of this propaganda most Englishmen really believe that in demanding the freedom of the seas the President has been tricked into supporting a German proposal. What is equally sinister, British officials in general believe that the Republican party in the United States is squarely behind them and that a Republican Congress, representing a majority of the American people, will sustain them against the President. This belief is strengthened daily by the news from the United States.

When I speak of the British Government in this matter I mean the Lloyd George Government, and particularly Lloyd George himself. I am unable to discover that he has any particular convictions on the subject - or on any subject - but he knows that British shipping is the most powerful single interest in the Empire, and that its support is vital to him. By promoting and encouraging their extreme propaganda he is every day making it more difficult for himself to arrive at any understanding whatever with the United States.

France, of course, will support Great Britain’s contention in the matter of the freedom of the seas. It is anti-Wilson, and therefore appeals to Clemenceau. But the British in exchange will sustain the French claims for reparation as far as it is possible to do so, and these claims for reparation are the principal concern of the French Government.

The Japanese will also support Great Britain - for a price - but part of the price is the removal everywhere of all restrictions against Japanese immigration and on this issue it is not easy for Great Britain to deal with Australia and Canada.

At the same time if the President sticks to his thesis that this is a war to end war, and that the peace must be a people’s peace, he will have an enormous popular following everywhere, but he will have to be patient in awaiting results. It is necessary to remember too, that everybody’s nerves are raw after four years of war, and it is doubly difficult to make any appeal to reason effective.

Anything the President attempts here must fail completely unless the American people can be induced to take a pro-American view of the issue. They have been so active and ardent for four years in championing the cause of various European countries, that most of them seem to have forgotten that the United States exists or that it has any particular excuse for existing. The immediate result of all this folly and foolishness is to block the way to anything resembling a peace of progress. Indeed the situation within the United States is more serious for the United States than the situation here, and unless means can be found to make the Americans realize it, the war has failed in its larger and more humanitarian aspects.

I do not see yet how the President can meet this question of division at home, but unless it is met, he can never convince these governments that he has the American people back of him on any point. They know that if he is not supported at home they can beat him here, and the tragic aspect of the situation is that a sordid and reactionary European diplomacy is relying upon Americans to help it defeat the larger issues of the war and make peace merely a matter of dividing the spoils among the victors.

To EM House
From FIC 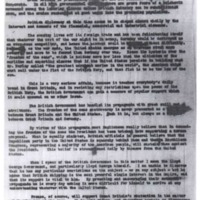