I thought I would write you a few lines today. I have been over to France and just got home the 1st of March. I knew your son John P. Ambuehl. He was the gunner of the squad that I was corporal of. He and I were wounded on the same day and went to the field hospital on the same day in the same ambulance. From there we went in different ambulances to different hospitals. I don't think he was wounded so very bad but I have never heard from him since. I suppose he has written to you.

He and I were very good friends so if he has gotten home, I would like to hear from him. If he hasn't gotten home and you would like to learn more of our life while we were in France I would be glad to write you about it. 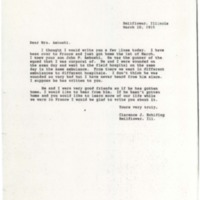