Request that president be informed of Col. Hart’s segregation order.

Asks that Secretary bring to the President’s attention and have abrogated or rescinded Col. Hart’s recent order segregating the negroes employed in the capitol and other places. Says he has received requests from a number of sources that this be done and thinks it very important. 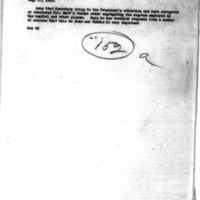