Letter from Anderson to Tumulty describing his successful attempt to call off a meeting with Mr. Trotter and saying that his job may be threatened as a result.

Enclosed herewith please find an advertisement clipped from the New York News of Thursday, Dec. 10th, and an announcement clipped from the same paper of December 17th, together with an announcement from the Amsterdam News of the same date. As you will notice, they refer to an advertised meeting at which Mr. William Monroe Trotter was to speak, on the evening of December 21st. Feeling that this effort to commercialize an interview with the President of the United States would do great harm to my race, I invited a number of the sanest and most influential colored men of this city to my residence for the purpose of organizing an opposition to this unfortunate movement. At this meeting I employed all the resources of language at my command to convince the gentlemen present that the race was in great danger of losing the friendship of that large group of people in this country, both in the North and in the South, who have come to realize that good men, whether black or white are pretty close together; and bad ones of both varieties, are not very far apart. The gentlemen present agreed with me very fully and a plan of opposition to the meeting was mapped out. As a result, the committee in charge of the Trotter meeting called it off and notified Mr. Trotter that he need not undertake the trip to this city. The day before yesterday I learned that several of the democrats, who curiously enough were the most noisy advocates of the Trotter meeting, were accusing me of a lack of race loyalty and were threatening to organize a movement for my displacement as Collector of Internal Revenue. While I am not at all fearful of the wrath of these gentlemen I, nevertheless, feel that the President ought to know that their opposition to me was due entirely to my success in preventing them from disgracing themselves and damaging the race of which I am so poor and so unsatisfactory a representative. 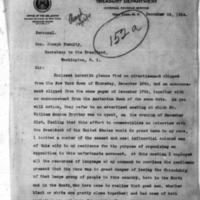