Letter about the Trotter incident suggesting that the President not offer an explanation for white antipathy toward African Americans.

As an estranged and somewhat confused Georgia Democrat in this particular environment which the city of Chicago, Illinois offers, may I voice an opinion which may seem to smack of a too Southern prejudice?

I refer to the Trotter impertinence . Why give them a civil answer, Mr. President, or condescend to offer an explanation of that quite natural antipathy which every white man feels for the transitional-staged "Evolutional Error" termed the Negro?

True, your very platform calls for diplomacy, but that state is only applicable to those who warrant such a consideration. What claim has the negro upon our protection? Simply that which comes of toleration - no more. But he claims equality!

Dear Mr. Wilson: follow your natural bend, and if you have, in the future, to depend upon the negro vote, don't run.

There are enough white men - Southern white men in these dear old States to support you, and I, for one, will cast my vote "Wilson-Wise."

But don't parley with that Trotter: for the sake of precedent and "blue-blood" assume your dignity of office. 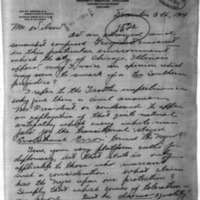