Joseph W. Henderson, editor of the New England Torchlight writes to Woodrow Wilson disagreeing with Wilson's stance in favor of segregation in the government departments.

If marked as Chapters, this would be Chapter three, or my third public concerning letter to you. My first was dated October, 1911, subject, "Wilson's White House Leaps." My second was June, 1913, subject, "Wilson's Anti-lobby Inconsistencies." This could be properly dubbed, "Wilson's Race Discriminating Consistences."

Of course, you know what I am going to talk about. It is that Wilson - Trotter - Equal Rights League - Race Segregation White House feud made public by your angry announcement. In the first place, before telling you where I stand and why I stand where I stand, I would tell you that I do not stand in with Mr. Trotter on a whole lot of things and I do stand in with him on a few things. Even on agreed measures of common interests to our race and country, I do not stand in with him hardly on any methods of procedure and stand out against him on most...

Trotter crossed over and supported you for the presidency. I told Mr. Trotter and those who followed him that the Negro would woe the day that they helped to send you from the school room to the White House. Mr. Trotter and his army followers demurred. I told them that the Negro's day of tears would come. They demurred. The tear day has come, and lo and behold Mr. Monroe Trotter has shed them and, best of all, he shed them on the White House door steps. This tear stream is now Nation-wide and Nation-long. I have not seen Mr. Trotter in eight months. I did not know that he was in Washington till the newspapers had told me so. I have not yet sent him my heart felt congratulations, which are now over-due.

Having said what I have already said, I trust that the nicety of the occasion will etiquettely allow me the humble privilege to frankly tell you that in the Wilson-Trotter-Equal-Rights-League-Race Segregation- White House Controversy, I line up with Trotter and against you, because I believe that Trotter was right and you were wrong. Yet, I believe that you told the truth when you said that Mr. Trotter was offensive. The reason that I believe it, is this: I know Mr. Trotter privately and publicly and I know you publicly. Your public feelings are of such tender touch that you have at times publicly shown it even before Mr. Trotter's White House advent. During the January Session of the 1912 New Jersey Legislature, you called a conference of New Jersey State Democrats. James Newgent, the then State Chairman and Democratic leader, taking an opposite course to you so offended you as to have allegingly caused you to have him reported as throwing the conference door wide open and dismissing Chairman Nugent in these words: "Mr. Nugent, there is the door!" If reports are correct, the Woman Suffrage delegation that called on you a few months ago, did not fair much better. If these things happened to white delegations that called on you as Governor and as President, what could be expected of a colored delegation? Then again, it might be expected that any man put in the White House Chair by the helping vote of Mississippi and South Carolina would become readily offended whenever a Massachusetts and an otherwise delegation of colored gentlemen would knock at the White House door for a bite of human justice. I believe that Mr. Trotter offended you; but, my honored sir, I do not believe that there was any ground for offense. Anyhow, Mr. Trotter was publicly against race segregation in the Government departments at Washington and publicly repudiated it. Mr. Trotter was right and I am with him. You were publicly in favor of segregation and publicly endorsed it. You were publicly wrong and I am publicly against you. As my method of congratulating him, I shall send Mr. Trotter a copy of this letter.

Yours for a stand pat Republican President, 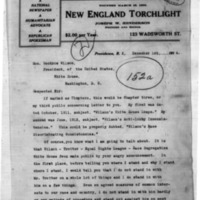