Sending resolutions made by the Methodist Episcopal Preachers' Meeting regretting Woodrow Wilson's backing of separation of the races in government employment.

Whereas, we believe class or race discriminations tend to produce discord, jealousies and bitterness; and

Whereas, the National Government should promote harmony, peace, and inspire the greatest loyalty of each member of the body politic without discrimination against nor preference for any class, sect, or race; and

Whereas, in every call for the Nation's defence the Colored soldier has responded promptly and most courageously;

Therefore be it Resolved, that the Methodist Episcopal Preachers' Meeting of Chicago hereby express its profound regrets that Mr. Woodrow Wilson, President of the United States of America, has endorsed the separation of the races in the government employ at Washington, D.C., We regard the handicaps which the American Negro has to face as sufficiently embarrassing without the influence of the Nation's president being recorded.

Adopted at the regular session of the Methodist Episcopal Preachers' Meeting of Chicago, on Monday, November twenty-third, Nineteen hundred and fourteen. 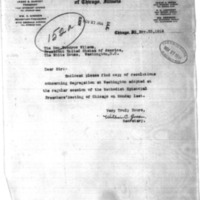 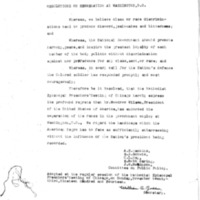