Los Angles Daily Times
November 17, 1914.- [Part II.]
Wilson, Women, Negrores.
by Alma Whitaker.
When the President received a deputation of negroes last week he became distinctly touchy and objected to their spokesman. He declared he had never before been spoken to in such a tone and with such a background of passion.

It sounded reminiscent somehow. And then we remembered. That is exactly what he said when the women suffragists waited upon him a short while ago.

So the negroes can take heart. They at least were favored with the identical sort of reception that the first American accords the American women. On both occasions he brought the interview to an abrupt close, complaining of their spokesman; on both occasions he considered himself insulted and his dignity jeopardized. Indeed, if one would draw invidious distinctions, the negro came off best. For the President did condescend to explanations in a somewhat conciliatory form to them, whereas the ladies, God bless 'em, had the interesting sensation of seeing the President turn his scholastic back upon them as he brought the interview to an end by abruptly leaving the room.

And both the negroes and the women were complaining of political discrimination against them. True, the negro already has the vote in theory, although not exactly in practice, in the President's own Southern States. That may have accounted for the conciliatory explanations.

The negroes were complaining about the new rule of segregation that has been introduced into government offices in this regime. Gradually but effectively the negro employees of the government have been segregated so that they do not work side by side with the white man. That is doubtless because so many southerners have been put into office under this Democratic administration, and it takes a real pure-blooded Democrat to find official fault with his darker brother. The President explained that there had been so much friction that the segregation became necessary. There was never any friction when the Republicans held office. The white men of the Republican party never felt that horrified sense of caste defiled when a negro worked in the same office, performing the same kind of work. Indeed, he rather gave the impression of being glad that the dark man was getting on so well.

Heaven knows I hold no brief for either women or negroes. Both can be peculiarly stupid on occasion. All their traditions are against them. But it is interesting to consider the southern point of view. They regard the negro in much the same way as so many men regard women. They are brought up with them -- how many little lordly Democrats have known their sweetest childhood in the company of their fond, foolish, black mammy and her offspring. We all know how intimate the little Democrat of the South becomes with his colored servitors, how much love and devotion is expended between them. He practically learns his whole ideas of life from the negro in his youth; and all the traditions and superstitions of Africa are carefully ingrained into his life. His moral ideals are largely the negro moral ideals - necessarily, for we all know how the teaching and understanding of the first ten years of a child's life stay with him to the end. The Roman Catholics have always declared that if they can have complete influence of the child for those first ten years he is theirs forever.

The southerner lives almost entirely under the domination of his negro servitors in his youth and he does not consider it infra dig [beneath dignity] to not only have them in the same household but to love them sincerely for their obvious virtues. Yet such a little while later he is busy repudiating this same negro--just as many men grow up to repudiate the worth of women.

But I could not help being impressed with President Wilson's assertion that the Presidency was not worth having, that the man who thought it was was a fool! He said the position was an intolerable burden. We must remember this when 1916 comes round.

And one of the things he had to do was to show the women and the negroes that their place in life had been preordained, that their duties were quite actual, but a shade inferior, and that it will become them to alter the decree of the Almighty. That political ambition for equality of treatment was an impertinence.

"While the American people want to support the advancement of the negro," said he, "as practical men, everybody knew that there was a point at which friction was apt to occur. The question must be stripped of sentiment and viewed in its facts, because the facts get the better of the individual whether one desired it or not."

"The question involved is not a question of intrinsic qualities, because all had human souls" (women, you will remember, are human beings in California only since they obtained the franchise!) "and were equal in that respect but for the present it was a question of economic policy whether the negro race could do the same things as the white race with equal efficiency."

Substitute women for negroes and you have the other argument all pat. But what worries us is that these negroes should have been given this work to do, these women should have been allowed to bear these responsibilities, while it was still a question whether they could accomplish them with equal efficiency. Isn't segregation, after the act, just a shade discriminating?

Los Angeles Daily Times
November 19, 1914 - [Part II]
Thursday Morning
Letters to "The Times."
The Times invites strong, clear, bright expression of opinion on current subjects, timely, pertinent and popular. Brevity should be kept in sight. Essays eschewed. Religious and personal controversies are tabu. Value is added to such letters by the signing of the writer's true name, which will be either published or withheld at the owner's request. Letters offered for publications should be in "parliamentary" language and are subject to editorial supervision.

Los Angeles. Nov. 18 - [To the Editor of The Times] I ask space to answer a letter by Alma Whitaker in Tuesday's Times, regarding the South, which showed an utter lack of knowledge and was grossly unjust. I deem it a duty to enlighten Mrs. Whitaker regarding some of the customs of a people she knows so little about.

Under the heading, "Wilson, Women and Negroes," the writer scores the President of the United States, a southern gentleman of culture and education, for refusing to allow a committee of insolent negroes to dictate to him how he should run the office of a great country. What business man would allow such an intrusion from his equals, to say nothing of the interference from those unfit by birth, education and social environment to even make suggestions. The manner in which he was approached was an insult to the head of our government, either Republican or Democrat.

Now we who have lived in the South know when a writer is familiar with conditions as they exist there, or whether it is an imaginary essay from a fertile imagination.

Not being a Democrat I can discuss without prejudice the negro question, a subject that should have been consumed by memory's bonfire ere this generation was born. Then the fertile pen of woman would find a more elevating subject on which to let off the condensed steam of an overwrought brain.

In considering the "southern point of view" I will disclaim any familiarity among the white and black children from a social equality basis. Oh, yes, the little pickaninnies were allowed to stay on the place, and they were kept in their place, too. The white children were fond of the colored ones, but there was no familiarity, and the negro mothers were as ready to correct their own offspring as her mistress was, if she didn't think Sambo was as respectful as he should be to his little master.

When the negro was bought from the northern owner by the southern man he was a servant, and as property, if for no other reason, was treated well by most masters, but remained a servant, and was not elevated to the parlor by the social equality route.

The southern people had plenty of time to look after their own children's morals and the morals and manners of our children will stand the test even to this day. They were at least not raised on commons or allowed to run the streets alone at night.

There was a peculiar devotion for our tired and faithful servants ad they loved us. The white children were rocked in the good old black arms of "mammy," and lulled to sleep on her breast by the mournful hum of "Swing Low, Sweet Chariot" and others. As a rule "mammy" loved her white babies more than her own flesh and blood and often I've heard one say: "Look here, nigger, doan you hurt my white chile."

The war ought to be over, but for those who think it not beneath them to associate and amalgamate with a race that has been our inferiors from the beginning of time, let them mingle in society which will necessarily mean the raising of a race of half-breeds. If you don't think it, use your eyes. Even now we see evidence of the fact.

For the sake of the southern people in your midst stop trying to change our views about the "negroes." We prefer to segregate. "Let us alone."
Mary S. Smith.
No. 1451 Wilton place

Letter to the Editor 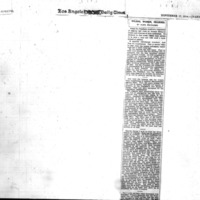