Letter to the Editor answering the letter of Alma Whitaker regarding the south.

Los Angeles Daily Times
November 19, 1914 - [Part II]
Thursday Morning
Letters to "The Times."
The Times invites strong, clear, bright expression of opinion on current subjects, timely, pertinent and popular. Brevity should be kept in sight. Essays eschewed. Religious and personal controversies are tabu. Value is added to such letters by the signing of the writer's true name, which will be either published or withheld at the owner's request. Letters offered for publications should be in "parliamentary" language and are subject to editorial supervision.

Los Angeles. Nov. 18 - [To the Editor of The Times] I ask space to answer a letter by Alma Whitaker in Tuesday's Times, regarding the South, which showed an utter lack of knowledge and was grossly unjust. I deem it a duty to enlighten Mrs. Whitaker regarding some of the customs of a people she knows so little about.

Under the heading, "Wilson, Women and Negroes," the writer scores the President of the United States, a southern gentleman of culture and education, for refusing to allow a committee of insolent negroes to dictate to him how he should run the office of a great country. What business man would allow such an intrusion from his equals, to say nothing of the interference from those unfit by birth, education and social environment to even make suggestions. The manner in which he was approached was an insult to the head of our government, either Republican or Democrat.

Now we who have lived in the South know when a writer is familiar with conditions as they exist there, or whether it is an imaginary essay from a fertile imagination.

Not being a Democrat I can discuss without prejudice the negro question, a subject that should have been consumed by memory's bonfire ere this generation was born. Then the fertile pen of woman would find a more elevating subject on which to let off the condensed steam of an overwrought brain.

In considering the "southern point of view" I will disclaim any familiarity among the white and black children from a social equality basis. Oh, yes, the little pickaninnies were allowed to stay on the place, and they were kept in their place, too. The white children were fond of the colored ones, but there was no familiarity, and the negro mothers were as ready to correct their own offspring as her mistress was, if she didn't think Sambo was as respectful as he should be to his little mister.

When the negro was bought from the northern owner by the southern man he was a servant, and as property, if for no other reason, was treated well by most masters, but remained a servant, and was not elevated to the parlor by the social equality route.

The southern people had plenty of time to look after their own children's morals and the morals and manners of our children will stand the test even to this day. They were at least not raised on commons or allowed to run the streets alone at night.

There was a peculiar devotion for our tired and faithful servants and they loved us. The white children were rocked in the good old black arms of "mammy," and lulled to sleep on her breast by the mournful hum of "Swing Low, Sweet Chariot" and others. As a rule "mammy" loved her white babies more than her own flesh and blood and often I've heard one say: "Look here, nigger, doan you hurt my white chile."

The war ought to be over, but for those who think it not beneath them to associate and amalgamate with a race that has been our inferiors from the beginning of time, let them mingle in society which will necessarily mean the raising of a race of half-breeds. If you don't think it, use your eyes. Even now we see evidence of the fact.

For the sake of the southern people in your midst stop trying to change our views about the "negroes." We prefer to segregate. "Let us alone."
Mary S. Smith.
No. 1451 Wilton place

Letter to the Editor 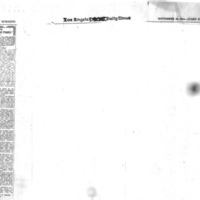