President Jefferson was one day riding with his grandson when they met a slave who took off his hat and bowed. The President returned the salutation by raising his hat, but the grandson ignored the civility of the negro. “Thomas,” said the grandfather, “do you permit a slave to be more of a gentleman than yourself?”

It is inconceivable, of course, that President Wilson should have “turned down” a negro delegation’s protest against segregation - a protest in which was embodied a principle as broad as human liberty - because their spokesman lacked “tact” in presenting their case. By the same token one might ignore a drowning man’s cry for help on the ground that it was not uttered in a pleasant, persuasive tone of voice.

It is quite obvious, from many things that have happened during his administration, that President Wilson expects the negroes to go on patiently enduring many “discriminations” inflicted by the whites which the whites would not suffer for a moment at the hands of the negroes. Thus does “the superior race” prove its superiority.

Perhaps the language of the spokesman was not tactful. Perhaps the President’s suave, pleasant words and promises regarding fair and equitable treatment proved a bit irritating when contrasted wit conditions as they exist and as the President knows they have existed for years. “The systematic denial of manhood rights to black men in America is the crying disgrace of the century.” These are the words of the editor of The Crisis, perhaps the ablest champion of his race. “We have wrongs, deep and bitter wrongs. There are local and individual exceptions; there are some mitigating circumstances; there is much to be excused; and yet for the great mass of 10,000,000 Americans of negro descent these things are true.” Then follows the statement that the members of his race are denied education, are driven out of the churches, and from hotels, theatres and public places, are publicly labeled like dogs when they travel, can seldom get decent employment, are forced down to the lowest wage scale, pay the highest rent for the poorest homes, are ridiculed in the press and on the stage and platform, taxed without representation, cannot get justice in the courts, are lynched with impunity and are publicly, continuously and shamefully insulted from the day of their birth to the day of their death, and in law and custom their women have no rights which a white man is bound to respect. 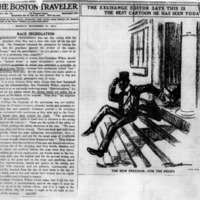