Speaker at Mass Meeting Says He Hoped President’s View Is Not Due to His Southern Birth.

Cheers for speakers, jeers for the President, and murmurs of discontent and agitation were loud and insistent yesterday when negroes of Washington met at Second Baptists Church to hear W. M. Trotter’s version of his interview at the White House last week- at which he was charged with insolence- and to protest against segregation in government departments:

Trotter was the principal speaker. In gesture, tone, word, and manner he aroused his audience, which crowded the church, to cries against segregation and cat-calls when the President was mentioned.

Denies He Was Insulting.

In opening, Trotter looked impressively down at reporters who had been placed in the front row, and watched while they wrote down:

“I emphatically deny that in language, manner, tone in any respect or to the slightest degree I was impudent, insolent or insulting to the President.”

The visit to the White House by Trotter and his delegation, by the way, was to ask the President to end, by executive order, the segregation of races in the Postoffice, and Treasury Departments. This, it was claimed, the President promised not to countenance when he was a candidate for President.

“We carried out our mission,” said Trotter. “The main issue for us was to force from the President, after two years’ effort, an expression of his views.” “The President,” Trotter said, “declared in favor of race segregation as beneficial to both whites and negroes.”

Trotter had been cheered for five minutes when he took the platform to begin his address. The early part of his speech was interspersed with cries for Trotter and against the President.

“Put him out,” was the cry of the negroes when Trotter mentioned the President during a part of his introduction. Laughter and hooting were indulged in freely by the audience, and the hall was seldom without subdued- in some cases- cries from Trotter’s aroused auditors.

Trotter looked out and, eventually, and said:

“Don’t show any disrespect for the office of President; I respect the office.”

Trotter, with a wealth of gesture and insinuation, “hoped that the view of the President is not due to his Southern birth.” He was confident, he said, that the Governor of Massachusetts would not have deemed him insolent.

The President, Trotter said, told him that he had not heard such insolence from any other citizen. Although he was sure no other citizen had been doomed to the “limbo of inferiority of status.”

A resolution adopted protesting against segregation was given the form of a statement to the American people. It contained this sentence:

“We believe that this nation is passing through a physical and spiritual crisis, and that the issues of life and death will be decided ultimately when the people of the nation shall be called upon in the usual way to pronounce judgement for or against the responsible government at Washington in its unrighteous policy of discriminating against the citizenship of the country on account of race and color; a policy of discrimination that can, and will be, if adopted, extended indefinitely to the 101 race groups that compose the national population.” 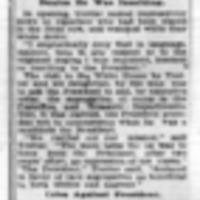