May it please your Excellency:-
I should feel that I failed in one of those duties which the heart prompts and the judgment confirms if I allowed the first opportunity to escape without expressing to you my feelings of regret that in a recent audience granted by you to some of the members of my race, reason was dimmed by passion and the usual amenity which obtains in such audiences was temporarily forgotten by the spokesman.

Unfortunate indeed is it that though such error, the representation of my race in her loftiest mood and thought was precluded.

Such conduct does not reflect the judgment of that body of Negroes whose mission is to vindicate the freedom of the race from others, rather than the constraint of dependency, and whose glory lies in the individual effort to promote a cordial relationship with the regnant race, for it is known of us that no great service is done if in criticizing some seeming wrong, we leave untouched the great question of race independence and cause the recipient of such criticism to turn to his strength.

It was the boast of Pericles that the Athenians readily communicated to all the advantages which they themselves enjoyed, and that they did not exclude the stranger from their walls and that Athens was a city open to the Human Family.

It is to be hoped that the unfortunate affair of recent date will not preclude other and wiser men of the race from enjoying the honor of an audience with you, and with this, may God sustain you and may the great virtue you possess become the standard of excellence for my race, and long and happy life to you and yours is the fervent prayer and cordial salutation of 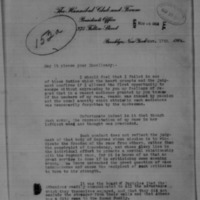