Negro Chairman Gets Call Down from President

Negro Chairman Gets Call Down from President

Negro Chairman Gets Call Down From President

Washington, Nov. 12.- Offended by the tone and manner of their chairman, W. M. Trotter of Boston, President Wilson to-day ended an interview with a delegation of negroes who called at the White House to protest against race segregation in government departments, with a warning that is the negroes wanted to see him again they would have to get another spokesman. The President said he has not been addressed in such fashion since he entered the White House.

Trotter came to the White House with a prepared speech, to which the President listened. It was after delivering this address, however, that Trotter made remarks in a tone which displeased President Wilson.

In the address Trotter reminded the President that the delegation called on Mr. Wilson a year ago, at which time he had promised to investigate the question.

“We [stated],” said Trotter, “that there could be no freedom, no respect from others, and no equality of citizenship under segregation of races. For such placement of employees means a charge, by the government, of physical indecency or infection, or of being a lower order of beings, or a subjection to the prejudice of other citizens, which constitutes inferiority of status.

“We stated that such segregation was a public humiliation and degradation of entirely unmerited and far-reaching in its injurious effects. Now, after the lapse of a year, we have come back, having found that all the forms of segregation of government employees of African extraction are still being practiced in the Treasury and Post Office Department buildings, and to a certain extent have spread into other government buildings.”

The delegation charges that Secretary McAdoo and Comptroller Williams in the Treasury and Postmaster-general Burleson had enforced segregation rules in their offices. President Wilson replied that he had investigated the question and he had been assured that there had been no discrimination in the comforts and surroundings given to the negroes. He added he had been informed by officials that the segregation had been started to avoid friction between the races, and not with the object of injuring the negroes.

The President said that he was deeply interested in the negro race, and greatly admired its progress. He declared the thing to be sought by the negro people was complete independence of white people, and that he felt that the white race was willing to do everything possible to assist them.

Trotter and other members at once took issue with the President, declaring the negro people did not need charity or assistance, but that, they took the position that the negroes had equal rights with the whites and that those rights should be respected. They denied there had been any friction between the two races before segregation was begun.

President Wilson listened to what they had to say, and then told the delegation that Trotter was losing control of his temper, and that he (the President) would not discuss the matter further with him.

After leaving the President’s private office Trotter. Maurice V. Spencer and others of the delegation declared their talk had been “thoroughly disappointing.”

They declared there would be a mass meeting in Washington Sunday to discuss the question. 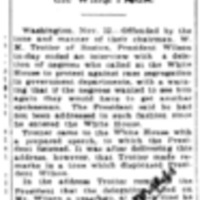