Letter to Wilson congratulating him for his "kind words... to Chairman Trotter."

Speaking for nine-tenths of the intelligent negroes of this country, especially of the south, I congratulate you upon your kind words at your office to Chairman Trotter of the anti-segregation Committee, touching the progress of my race. 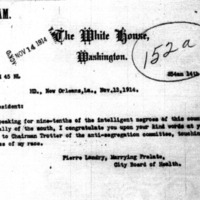