William A. Sinclair to Woodrow Wilson

William A. Sinclair to Woodrow Wilson

Letter to Woodrow Wilson listing reasons why segregation of government employees should be abolished.

Unavoidly circumstances make it impractical for me to join the delegation as field secretary of the Constitution League of the United States who are to present a memorial to you on Thursday, November 12th instant, invoking your intervention against the segregation of government employees at Washington or elsewhere on the ground of race or color. I respectfully submit that such segregation violates the spirit and letter of the Constitution of the United States, forces hardships and degradations on colored employees, undermines civilization, is subversive of American Institutions, contravenes every principle of righteousness and justice and is a shameless reproach to our christian religion. Segregation represents not the ideals of freedom but the ideals of slavery. We pray that you, as the christian President of this free and christian nation, will use your great powers which are more than amply sufficient to remove this foul blot from our civilization. 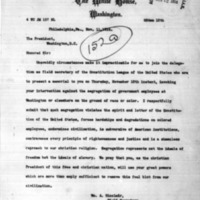