Wilson gives a speech defending his plan for the League of Nations.

President Wilson concluded a 19-hour visit in St. Louis last night with a forty-minute address at the Coliseum before the largest audience which had greeted him on his 30-day tour of the country in advocacy of the league of nations and full ratification of the peace treaty. Every seat was taken and the no standing rule was violated on the main floor and in both balconies.

The capacity of the Coliseum under these conditions is estimated to be 12,000. Approximately an equal number was turned away at the doors, which were closed at 7:10, after being kept open only 20 minutes.

Those seeking admission to the Coliseum had begun gathering as early as 3 oclock in the afternoon and hundreds waited hours for the doors to open.Several Women Faint.At the time of the Presidents arrival, about 8:15, the streets surrounding the Coliseum were packed with late-comers who could have no hope of entering the hall. In this throng several women fainted, but no one was reported seriously injured.

The gathering to greet the President was in striking contrast with the comparative sparsity of the attendance at the meeting addressed by United States Senator James A. Reed of Missouri, oratorical archenemy of the league, in the same hall a month ago, when the largest estimate of the number of hearers was 6000.

The entrance of the presidential party into the packed hall was the occasion for an unusual ovation. Mrs. Wilson and the escorting committee of women appeared first. Everyone stood and cheered as the Presidents wife took her place in the front row of seats just back of the speakers platform.

This in itself was a wonderful outburst of popular enthusiasm, but a minute later, when President Wilson appeared on the platform, it was intensified a hundred-fold. A small flag had been placed at every seat. With the arrival of the President these flags were caught up and waved in unison with a series of deafening cheers which continued for nearly five minutes. The Presidents smile was sincerely appreciative as he looked out over the vast gathering of shouting flag-wavers. He tried to sit out the demonstration, accepting the plaudits without seeming to encourage them, but the appeal for recognition of the tribute became so strong he could not resist it and he arose and smiling, almost boyishly, he bowed to the four quarters of the hall.

The efforts of James E. Smith, chairman of the meeting, to quiet the shouters by holding out his hands in a gesture of abatement brought forth a final salvo of applause, after which Smith introduced Gov. Gardner, who again started the applause by referring to the President as the father of world democracy. The Governors introduction was brief, well-worded and effective. The President shook hands with him most cordially at its completion.

Elsewhere in this paper will be found the text of President Wilsons Coliseum speech. He was in fine voice and, although he spoke without apparent effort, the frequent bursts of applause from far corners of the great hall showed that he was being heard.

Did Not Keep Still.

As the President was about to start speaking a photographer in the lower balcony at the south end of the hall shouted through a megaphone to announce that a flashlight photograph was about to be taken. The President did not keep still, as suggested by the photographer, but taking his cue from the camera mans request he put over the most effective exordium:My fellow countrymen we have met on an occasion that is much too solemn to care how we look. We ought rather to care how we think. This brought home to the audience at once the serious purpose of the meeting and the effect was intensified as the President proceeded with an address which had the intimate qualities of a talk rather than the emotion-stirring attributes of an oration. In fact at the outset the President pointedly said he did not propose to deal in any kind of oratory.

Previous warning that the flashlight would be exploded had been given to the President by Chairman Smith, who found the only opportunity to do this while the President was standing at attention while a band played The Star-Spangled Banner.Polite but Pungent Irony.There were many moments when remarks of the President, put over with his rare quality of homely cultivation, aroused great enthusiasm, but the greatest and most spontaneous demonstration came when, with polite, but none the less pungent irony, he referred to the active opponents of the treaty and said he wondered if they had read it.If anyone will tell me which of them hasnt read it, I will send them a copy, he said.

From all parts of the hall came cries of Reed! The application of the remark to the senior Senator from Missouri manifestly pleased the President, as he smiled broadly while the demonstration was under way.

I'm not a quitter, for one was another expression that brought clamorous applause. Some in the audience shouted: Neither are we.In a few words the President touched a vital spot in the discussion of the league of nations covenant when he pointed out that under the covenant all the nations agree that they will not go to war without submitting their differences to arbitration or to discussion by the council of the league which shall have six months in which to consider it, and that after the councils decision is announced and rejected another three months must elapse before war can be begun.

There was loud applause when he said: I tell you, my fellow citizens, that any nation that is in the wrong and waits nine months before it goes to war will never go to war.

This was followed by the scoring of a point that made even a deeper impresison on his hearershis description of the rigors of the boycott which would be instituted against any nation that refused to abide by the leagues decision that it had no just cause for going to war.

That what happens? he said. War? No, something much more terrible. Absolute boycott of that nation. The doors are closed upon her so that she cant ship anything out or receive anything. She cant send a letter out or receive one in. No telegraphic message can cross her borders; no person can cross her borders. She is absolutely closed. (Applause.) And all the fighting nations of the world agree to join in that boycott. (Applause.) My own judgment is that war will not be necessary after that. If it is necessary, then it is perfectly evident that the nation is one of the nations that wants to run amuck, and if any nation wants to run amuck in modern civilization, we must all see that the outlaw is captured.

The Presidents impressive description of the terrors of an international boycott fairly made his hearers gasp. Exclamations of horrified realization could be heard from all parts of the hall, and when the President said: No person can cross her borders, a distant and unmistakable whistle expressing the limit of amazement came from center section of seats on the arena floor.

There was an apparent full accord with the President in his assertion that in any nation should violate the covenant we must capture the outlaw.Every expression of the President indicating his firm belief, if not his prophetic prediction, that the league would be established and would survive in spite of its enemies brought forth applause. This was most spontaneous when he said: There can be no league without our partnership, and I venture to say we will be the senior partner. There were cries of No, when he asked: Shall we stand alone as part of a world in arms?

His description of the league agreement as a covenant of arbitration and discussion struck the audience as being finely put, as did also his assertion that the American people havent forgotten how to think.One of the dramatic moments was when after a summary of the leagues advantages and safeguards, he said: Go into it, and war will never come again. 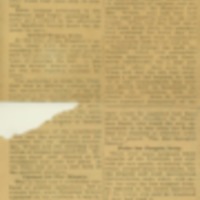