An editorial on a potential coal miner’s strike.

The President’s powerful protest against the threatened strikes of the bituminous coal miners, whose vigorous terms convincingly belie some recent sensational reports about his physical condition, will be heartily approved and energetically supported by the enlightened opinion and intelligent sentiment of the whole country. There can be no disputing the rightfulness and reasonableness of the position which he occupies. Whatever grievances the miners may have, and thus far none deserving of serious consideration have been alleged, it is not to be endured that they should undertake to enforce the excessive demands which they have made by precipitating an industrial war, which, if it were to be prolonged, would involve the interests of the American people in an immeasurable disaster.

The uninterrupted production of bituminous coal in quantities sufficient to the need is a vital and absolute necessity to the maintenance of our industrial activities. It is essential not only to the comfort and welfare, but to the very life of the community, for if deprived of coal the transportation systems through whose instrumentality the supplies of food and other necessaries are distributed among the people, would presently be paralyzed and millions of our citizenship would be reduced to a condition of destitution and distress. Suffering from cold and hunger, they would in a short time be in as desperate straits as those victims of the war in the countries where its ravages were worst. But these are considerations toward which the men who are engaged in promoting the strike with which the country is menaced have shown themselves to be supremely and callously indifferent.

They perfectly well understand the gravity of the course which they are intending to pursue. They realize by what disastrous consequences it must be attended and they count upon achieving success through the very severity of the pressure upon the public which they feel themselves able to apply. Here is the explanation of the arrogant and defiant attitude which they have from the first assumed. Because they believe that they have a stranglehold upon the national throat, they began by issuing an ultimatum which at no time throughout the subsequent discussion have they shown the least disposition to modify or withdraw, and with them as with as with the highwayman, who holds a pistol at the head of the helpless captive whom he means to rob, their cry has all along been “Your money or your life.”

That the American people are prepared patiently and unresistingly to submit to an assault so outrageous is unimaginable; and when they shall have been fully aroused, as presently they will be, it is a safe predication that their assailants will find them less helpless than they had calculated. Public opinion will overwhelmingly condemn a strike which is so entirely unjustifiable in its origin and would be so destructive in its results, and that public opinion is a power to be reckoned with has too frequently been proved to require any further demonstration. It was exemplified only the other day in the case of the railway strike in Great Britain and should the crisis which is apprehended here arise some means for its effective expression will certainly be found. The President has promised that the national interests who paramountcy he rightfully recognizes will be protected; and in whatever measures he and his advisers may adopt or propose they may safely count upon receiving the support and co-operation of the people’s representatives in Congress.

Our law-makers, who in the past have been too much inclined to truckle to the so-called labor vote, and to enact class legislation at the behest and for the special benefit of the labor unions, appreciate that we have come to the parting of the ways and that the time has arrived when, in accordance with principle that the safety of the people should be the first consideration, steps must be taken to curb a power which the labor organizations are showing such a strong disposition to abuse. At this hour trades unionism is on trial. Its leaders will do well to watch their step and to take care how they challenge a conflict whose issue, should it occur, would not for a single moment be in doubt. 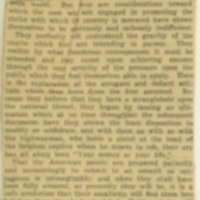