The War Industries Board declares in this circular that all new undertakings must directly relate to the war effort.

TO ALL MANUFACTURERS, JOBBERS, DISTRIBUTORS, DEALERS, AND CONSUMERS OF BUILDING MATERIALS:

As far back as March 21, 1918, the following resolution was unanimously adopted and given wide publicity by the War Industries Board:

Whereas it has come to the notice of this Board that new industrial corporations are being organized in different sections of the United States for the erection of industrial plants which can not be utilized in the prosecution of the war; andWhereas plans are being considered by certain States, counties, cities, and towns for the construction of public buildings and other improvements which will not contribute toward winning the war; andWhereas the carrying forward of these activities will involve the utilization of labor, materials, and capital urgently required for war purposes: Now, therefore, be itResolved by the War Industries Board, that in the public interest all new undertakings not essential to and not contributing either directly or indirectly toward winning the war, which involve the utilization of labor, material, and capital required in the production, supply, or distribution of direct or indirect war needs will be discouraged, notwithstanding they may be of local importance and of a character which should in normal times meet with every encouragement; and be it furtherResolved, That in fairness to those interested therein notice is hereby given that this board will withhold from such projects priority assistance, without which new construction of the character mentioned will frequently be found impracticable, and that this notice shall be given wide publicity, that all parties interested in such undertakings may be fully apprised of the difficulties and delays to which they will be subjected and embark upon them at their peril.

Since that time the manufacturers of the principal building materials, including paving brick, face brick, common brick, hollow tile, cement, and lime, have agreed to cooperate with the War Industries Board in carrying into effect the spirit of the foregoing resolution, and the individual manufacturers have signed and filed with the Priorities Division pledges in writing substantially as follows:The undersigned hereby pledges itself not to use, nor so far as lies within its power permit to be used, any products of its manufacture now in, or which may hereafter come into, its possession or control, save (a) for essential uses as that term has been or may be defined or applied from time to time by the Priorities Division of the War Industries Board, or (b) under permits in writing signed by or under authority of such Priorities Division; that it will make no sale or delivery of such products to any customer for resale until such customer has filed with it a similar pledge in writing, and that it will use its utmost endeavor to insure that its products shall be distributed solely for essential uses.

Similar pledges are exacted by manufacturers from their customers who purchase for resale.

Structures, roads, or other construction projects falling within the following classifications are hereby approved, and no permits or licenses will be required therefor:

(2) Repairs of or extensions to existing buildings involving in the aggregate a cost not exceeding twenty-five hundred dollars ($2,500).

(3) Roadways, buildings, and other structures undertaken by or under contract with the United States Railroad Administration or a railroad operated by such administration.

(4) Those directly connected with mines producing coal, metals, and ferro-alloy minerals; and

No building project not falling within one of the foregoing classes shall be undertaken without a permit in writing issued by or under the authority of the Chief of the Nonwar Construction Section of the Priorities Division of the War Industries Board.

Should one contemplating building conceive his proposed project to be in the public interest or of such essentiality that under existing conditions it should not be deferred, then he will make a full statement of the facts in writing, under oath, and present same to the local representative of the Council of National Defense, applying to such representative for his approval of the proposed construction. Should such local representative approve the construction project, he will promptly transmit the application, stating clearly and fully his reason for approving same, to the Chairman of the State Council of Defense, for his consideration. If approved by the latter, he will transmit it to the Chief of the Non-War Construction Section of the Priorities Division of the War Industries Board, Washington, DC, for consideration, if need be further investigation, and final decision. Should the application be finally approved by the Priorities Division a construction permit will issue which will constitute a warrant to manufacturers and dealers who have taken the pledges of cooperation above mentioned to sell and deliver building materials required in the construction of the licensed building project.

While it is not the policy of the Government to unnecessarily interfere with any legitimate business, industry, or construction project, it must be borne in mind that there is an imperative and constantly increasing demand for labor, material, and capital for the production and distribution of direct and indirect war needs, to satisfy which much non-war construction must be deferred. A full realization of this fact by all loyal and patriotic citizens, including State and municipal authorities, is all that is required to postpone such construction activities as interfere with the war program. The State and local representatives of the Council of National Defense are with confidence depended upon to fully acquaint the whole people of these United States with the pressing need for the most rigid economy, measured not only in terms of dollars but in terms of labor, materials, and transportation service. The construction projects which must now be deferred may be undertaken when we shall have won the war and will then furnish employment to the returning artisan now on the battle front as well as those who will then be released by strictly war industries. 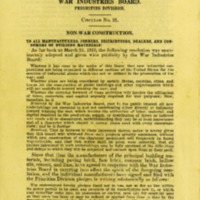