An article on President Wilson’s popularity in Europe.

I am leaving Europe to-day, May 1, for the United States. Arriving in France December 9, last, one of the advance guard of American correspondents, I have been as close to the commissioners to negotiate peace as the average Paris reporter. This does not say as much as it would seem, for “news” has not been abundant around the center of things at the conference. The “big three” have for the most part been hermetically sealed against the floods of writers beating against them. Yet talk there has been, of course, much talk. . . . Looking back across a winter of all this, the net impression is of a babel; if not of a Donnybrook fair of a jumble, a blur of political turmoil, greed, and hatreds, a mess.

Alone here in my corner aboard the steamer that is carrying me over the waters from Marseilles to Brooklyn, my notes before me, I am trying to state the criticisms of the peacemakers at Paris that seem to contribute to this picture of chaos and black night.

In the first place, there is the greed. What Gen Smuts feared has proved to be a fact. The decomposition of Russia, Austria and Turkey left peoples untrained politically and deficient in power of self-government, destitute indeed. Of these Gen Smuts warned in his pamphlet, which appeared last December, that, “If there is going to be a scramble among the victors for this loot the future of Europe must indeed be despaired of. The application of the spoils system at this most solemn juncture in the history of the world, a repartition of Europe at a moment when Europe is bleeding at every pore as a result of partitions less than half a century old, would indeed be incorrigible madness on the part of the rulers, and enough to drive the torn and broken peoples of the world to that despair of the state which is the motive power behind Russian bolshevism.”

There has been much written by way of “claims” in Paris, but little has been said about the duties. Most of the great nations represented at the conference have yielded to the temptation to use their unique opportunity for their selfish ends. Gen Smuts’ forecast of this now reads like prophecy; indeed he even gave the reasons which afterward have been used in fact to defend the “claims.” Realizing that they have fought and suffered on an unparalleled scale they have asked, these hungry ones, must we “quixotically throw away the fruits of victory now that the great opportunity has come?” We are now in position to mold the world closer to our heart’s desire; “why miss the chance which may never come again in history.”

The Blur of Conflicting Claims

Of such has been the “voice of the tempter” indeed. The problem of the Adriatic is a hodge-podge of conflicting “claims”; the same is true of Britain’s absent-minded acquisitions of additional empire. It is true of the “redeemed” nations generally. A new Balkan tangle threatens along the line of aspiring nations that once belonged to Russia. The new boundaries of Poland are not wholly consonant with the principle of self-determination. Japan’s reach for Shantung with its millions of Chinese and economic resources can’t be said to be wholly in accord with the principles of a permanent peace. Out of this mass of “conflicting claims,” artificially set up, artificially discussed, artificially decided, one can but gather the impression of a blur, a fuzzy political hotchpot.

Another factor contributing to the discouragement in the situation is what seems to be a contented ignorance that expresses itself in astonishing ways. The disposition to interfere politically in the affairs of other nations is in Paris quite apparent and that in spite of the failure of such attempts throughout history. Political systems are being imposed upon new nations seemingly without limit. Three men are attempting to fashion the world, without advice from anybody.

Sir Robert Cecil, whose main proposal at the time was the principle of delay characteristic of the Bryan treaties, confessed to me early in January his ignorance of the Bryan treaties, and in one breath said that “the sovereignty of nations should remain intact” and that “we must have a league of nations with power to limit the sovereignty of nations.” No peacemaker in Paris seems to remember anything of the real achievements at The Hague in 1899 and again in 1907. In the name of peace, politicians are undoing the work of trained diplomats, and recarving the world in a manner quite similar to the methods that have produced the wars from of old.

President Wilson’s interest seems confined wholly to the covenant. In the meantime, his reputation in Europe as a statesman has gradually sunk from the highest possible place to about the lowest. This phenomenon has been especially distressing to Americans in France. The reasons are difficult to formulate, but in general they may be stated with some definiteness.

In the first place, there is the fact of his presence in France. No man could possibly have maintained at its level on December 14, 1918, the enthusiasm and adoration of Europe, living constantly in their midst and taking sides as he has naturally been forced to do upon many highly controversial questions. The community estimate of a man in its midst cannot long remain the same. It rises or lowers. It was impossible for Mr Wilson’s reputation to rise beyond the great hights of those early days of his European reception. It was psychologically inevitable that his popularity should decline.

And it did. Nothing that Mr Wilson could have done could possibly have forestaled this. There are evidences that he tried to forestall it. At the first, we were told that he planned not to take part in the deliberations of the conference. He announced later that he would sit at the table, but not in his capacity as president of the United States, but as his own prime minister, a plenipotentiary merely. Such a segregation of personalities, however, proved impossible. Mr Wilson sits at the table as president of the United States. In spite of his aloofness, there has been sufficient familiarity to breed its proverbial measure of contempt.

So far as I can gather, the public opinion of the nations allied with ours was that the first function of the peace congress was to end the war, to complete the military job, to end the thing we started do to Germany. Mr Wilson opposed this, set his will against the will of Europe; and naturally his popularity has declined in consequence.

No One “On the Inside”

It is true so far as I can learn that Mr Wilson consults with no one. During his early days in Paris we did hear of consultations with Sir Robert Cecil, Gen Smuts and with Col House; but these conversations had wholly to do with the covenant of the league of nations. So far as I know even these conferences have ceased, with the possible exception of those with Col House about whom no one knows anything. Even the members of the president’s commission frankly confess that they are “not on the inside.” This disposition to consult no one has been a source of increasing irritation, not only among Europeans, but among Americans concerned with the establishment of peace.

There are a number of little matters also, very little matters it will be said, yet matters which have worked to the decline of the president’s reputation in Paris. Men in the army, in the Red Cross and the like, have been forbidden to take their wives with them to Europe. Mr Wilson not only took his wife with him to Europe but various men of his party have their wives with them. The Red Cross has its headquarters at 2 Place de Rivoli, within easy walking distance of the Hotel de Crillon. Its personnel is made up of many men of many minds: but some of them are prominent in America, socially and politically. They all feel that their work has been of importance. And it has. They have naturally expected some recognition from Mr Wilson, a visit from him or from Mrs Wilson. No such visit has been forthcoming.

Of Course, the Mail Service is Poor

There are other sources of irritation such as the abominable mail service in our army. Because of these, some of them seemingly irrelevant matters, and similar things, the gossip of Paris with reference to the president has sunk to indescribable depths.It is charged that Mr Wilson has shown no appreciation of the serious condition facing France. With her main industrial center destroyed, the one thing that France has wanted to know is the amount she might reasonably expect from Germany. It has been impossible for France to fix a budget, to plan her industries or to adjust her affairs. American experts are passing upon the financial claims of French manufacturers who have lost essentially their all in the mining and manufacturing areas of the northeast. These American experts, representing the president, have submitted at times reports adverse to the claims of the French. There may be cases where the French claims have been excessive; I do not know about this. I do know that American experts sitting in Paris criticized the claims of one iron master who resubmitted his claims, after which they were reviewed on the ground by two other American experts and approved. This kind of self-contradictory procedure has had its effect upon Mr Wilson’s reputation in France.

No Longer an Idol

Mr Wilson chafes under the restraint of precdents, in consequence of which he aims to belittle their importance. He criticizes the lawyers. . . . But the point here is that President Wilson is no longer the idol of Europe. He is hated. They wish he were back in the United States, and the fact contributes to the blur that is Paris. 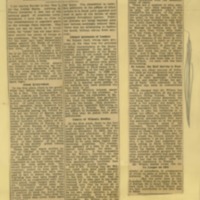