President Woodrow Wilson describes the historic relationship between France and the United States.

Whenever Frenchmen and Americans are gathered together it is the habit to toast him who has become, by time and tradition, as well as by hois gallant figure in history, the hero of both countries - the Marquis de Lafayette. I would not take one flower from his wreath of fame to make a brighter garlanbd for another, but it has always seemed to me that the origin of the historic friendship which has always existed between your country and mine, strikes deeper than the mere debt of gratitude we owe for the help of France in the war for American independence. France was the inspiration of the American adventure in the search for liberty, equality and fraternity. We lisped our love of freedom in the writings of your great pioneers long before the Revolution in either country. The very Declaration of Independence which notified the world of the birth of a new state in the family of nations, was largely paraphrased from French conceptions of freedom and sovereignty.

And when the Revolution in America was won, and the struggle to throw off monarchical institutions was still engulfing France, it was the courageous sympathy of our leaders with the aspirations of your people which sowed the seed for a friendship which shall continue in perennial bloom, its harvest still ungarnered.

Two of the greatest American statesmen whose master minds shaped the early course of our history, were Benjamin Franklin and Thomas Jefferson, and both as ambassadors to Paris learned their lessons of liberty at the shrine of France.It is an interesting fact that never since the two Republics were born has there passed between them either the threat of war, or the doubt of each others friendship. And now their sons have fought and bled and died, shoulder to shoulder, in the same great cause, they will forever have one aspiration to serve the peace and progress of the world, one hope, one purpose and one God.* * * * 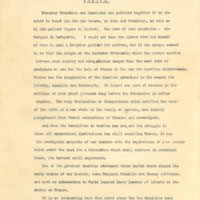