I feel very keenly the distinguished honor which has been conferred upon me by the great University of Paris, and it is very delightful to me also to have the honor of being inducted into the great company of scholars whose life and fame have made the history of the University of Paris a thing admired among men of cultivation in all parts of the world.

By what you have said, sir, of the theory of education which has been followed in France, and which I have tried to promote in the United States, I am tempted to venture upon a favorite theme. I have always thought, sir, that the chief object of education was to awaken the spirit, and that inasmuch as literature whenever it touched its great and higher notes was an expression of the spirit of mankind, the best induction into education was to feel the pulses of humanity which had beaten from age to age through the utterances of men who had penetrated to the secrets of the human spirit. And I agree with the intimation which has been conveyed to-day that the terrible war through which we have just passed has not been only a war between nations, but that it has been also a war between systems of culture—the one system, the aggressive system, using science without conscience, stripping learning of its moral restraints, and using every faculty of the human mind to do wrong to the whole race; the other system reminiscent of the high traditions of men, reminiscent of all those struggles, some of them obscure but others clearly revealed to the historian, of men of indomitable spirit everywhere struggling toward the right and seeking above all things else to be free. The triumph of freedom in this war means that spirits of that sort now dominate the world. There is a great wind of moral force moving through the world, and every man who opposes himself to that wind will go down in disgrace. The task of those who are gathered here, or will presently be gathered here, to make the settlements of this peace is greatly simplified by the fact that they are masters of no one; they are the servants of mankind, and if we do not heed the mandates of mankind we shall make ourselves the most conspicuous and deserved failures in the history of the world.

My conception of the league of nations is just this, that it shall operate as the organized moral force of men throughout the world, and that whenever or wherever wrong and aggression are planned or contemplated, this searching light of conscience will be turned upon them and men everywhere will ask, “What are the purposes that you hold in your heart against the fortunes of the world?” Just a little exposure will settle most questions. If the central powers had dared to discuss the purposes of this war for a single fortnight, it never would have happened, and if, as should be, they were forced to discuss it for a year, war would have been inconceivable.

So I feel that this war is, as has been said more than once to-day, intimately related with the university spirit. The university spirit is intolerant of all the things that put the human mind under restraint. It is intolerant of everything that seeks to retard the advancement of ideals, the acceptance of the truth, the purification of life; and every university man can ally himself with the forces of the present time with the feeling that now at last the spirit of truth, the spirit to which universities have devoted themselves, has prevailed and is triumphant. If there is one point of pride that I venture to entertain, it is that it has been my privilege in some measure to interpret the university spirit in the public life of a great Nation, and I feel that in honoring me to-day in this unusual and conspicuous manner you have first of all honored the people whom I represent. The spirit that I try to express I know to be their spirit, and in proportion as I serve them I believe that I advance the cause of freedom.

I, therefore, wish to thank you, sir, from the bottom of my heart for a distinction which has in a singular way crowned my academic career. 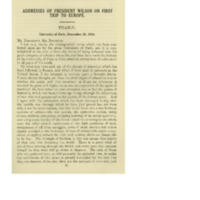