Fellow Citizens: This is the anniversary of our acceptance of Germany’s challenge to fight for our right to live and be free, and for the sacred rights of free men everywhere. The Nation is awake. There is no need to call to it. We know what the war must cost, our utmost sacrifice, the lives of our fittest men and, if need be, all that we possess. The loan we are met to discuss is one of the least parts of what we are called upon to give and to do, though in itself imperative. The people of the whole country are alive to the necessity of it, and are ready to lend to the utmost, even where it involves a sharp skimping and daily sacrifice to lend out of meagre earnings. They will look with reprobation and contempt upon those who can and will not, upon those who demand a higher rate of interest, upon those who think of it as a mere commercial transaction. I have not come, therefore, to urge the loan. I have come only to give you, if I can, a more vivid conception of what it is for.

The reasons for this great war, the reason why it had to come, the need to fight it through, and the issues that hang upon its outcome, are more clearly disclosed now than ever before. It is easy to see just what this particular loan means because the Cause we are fighting for stands more sharply revealed than at any previous crisis of the momentous struggle. The man who knows least can now see plainly how the cause of Justice stands and what the imperishable thing is he is asked to invest in. Men in America may be more sure than they ever were before that the cause is their own, and that, if it should be lost, their own great Nation’s place and mission in the world would be lost with it.

I call you to witness, my fellow countrymen, that at no stage of this terrible business have I judged the purposes of Germany intemperately. I should be ashamed in the presence of affairs so grave, so fraught with the destinies of mankind throughout all the world, to speak with truculence, to use the weak language of hatred or vindictive purpose. We must judge as we would be judged. I have sought to learn the objects Germany has in this war from the mouths of her own spokesmen, and to deal as frankly with them as I wished them to deal with me. I have laid bare our own ideals, our own purposes, without reserve or doubtful phrase, and have asked them to say as plainly what it is that they seek.

We have ourselves proposed no injustice, no aggression. We are ready, whenever the final reckoning is made, to be just to the German people, deal fairly with the German power, as with all others. There can be no difference between peoples in the final judgment, if it is indeed to be a righteous judgment. To propose anything but justice, even-handed and dispassionate justice, to Germany at any time, whatever the outcome of the war, would be to renounce and dishonour our own cause. For we ask nothing that we are not willing to accord.

It has been with this thought that I have sought to learn from those who spoke for Germany whether it was justice or dominion and the execution of their own will upon the other nations of the world that the German leaders were seeking. They have answered, answered in unmistakable terms. They have avowed that it was not justice but dominion and the unhindered execution of their own will.

The avowal has not come from Germany’s statesmen. It has come from her military leaders, who are her real rulers. Her statesmen have said that they wished peace, and were ready to discuss its terms whenever their opponents were willing to sit down at the conference table with them. Her present Chancellor has said,—in indefinite and uncertain terms, indeed, and in phrases that often seem to deny their own meaning, but with as much plainness as he thought prudent,—that he believed that peace should be based upon the principles which we had declared would be our own in the final settlement. At Brest-Litovsk her civilian delegates spoke in similar terms; professed their desire to conclude a fair peace and accord to the peoples with whose fortunes they were dealing the right to choose their own allegiances. But action accompanied and followed the profession. Their military masters, the men who act for Germany and exhibit her purpose in execution, proclaimed a very different conclusion. We can not mistake what they have done,—in Russia, in Finland, in the Ukraine, in Rumania. The real test of their justice and fair play has come. From this we may judge the rest. They are enjoying in Russia a cheap triumph in which no brave or gallant nation can long take pride. A great people, helpless by their own act, lies for the time at their mercy. Their fair professions are forgotten. They nowhere set up justice, but everywhere impose their power and exploit everything for their own use and aggrandizement; and the peoples of conquered provinces are invited to be free under their dominion!

Are we not justified in believing that they would do the same things at their western front if they were not there face to face with armies whom even their countless divisions can not overcome? If, when they have felt their check to be final, they should propose favourable and equitable terms with regard to Belgium and France and Italy, could they blame us if we concluded that they did so only to assure themselves of a free hand in Russia and the East?

Their purpose is undoubtedly to make all the Slavic peoples, all the free and ambitious nations of the Baltic peninsula, all the lands that Turkey has dominated and misruled, subject to their will and ambition and build upon that dominion an empire of force upon which they fancy that they can then erect an empire of gain and commercial supremacy,—an empire as hostile to the Americas as to the Europe which it will overawe,—an empire which will ultimately master Persia, India, and the peoples of the Far East. In such a programme our ideals, the ideals of justice and humanity and liberty, the principle of the free self-determination of nations upon which all the modern world insists, can play no part. They are rejected for the ideals of power, for the principle that the strong must rule the weak, that trade must follow the flag, whether those to whom it is taken welcome it or not, that the peoples of the world are to be made subject to the patronage and overlordship of those who have the power to enforce it.

That programme once carried out, America and all who care or dare to stand with her must arm and prepare themselves to contest the mastery of the World, a mastery in which the rights of common men, the rights of women and of all who are weak, must for the time being be trodden under foot and disregarded, and the old, agelong struggle for freedom and right begin again at its beginning Everything that America has lived for and loved and grown great to vindicate and bring to a glorious realization will have fallen in utter ruin and the gates of mercy once more pitilessly shut upon mankind!

The thing is preposterous and impossible; and yet is not that what the whole course and action of the German armies has meant where-ever they have moved? I do not wish, even in this moment of utter disillusionment, to judge harshly or unrighteously. I judge only what the German arms have accomplished with unpitying thoroughness throughout every fair region they have touched.

What, then, are we to do? For myself, I am ready, ready still, ready even now, to discuss a fair and just and honest peace at any time that it is sincerely purposed,—a peace in which the strong and the weak shall fare alike. But the answer, when I proposed such a peace, came from the German commanders in Russia, and I cannot mistake the meaning of the answer.

I accept the challenge. I know that you accept it. All the world shall know that you accept it. It shall appear in the utter sacrifice and self-forgetfulness with which we shall give all that we love and all that we have to redeem the world and make it fit for free men like ourselves to live in. This now is the meaning of all that we do. Let everything that we say, my fellow countrymen, everything that we henceforth plan and accomplish, ring true to this response till the majesty and might of our concerted power shall fill the thought and utterly defeat the force of those who flout and misprize what we honour and hold dear. Germany has once more said that force, and force alone, shall decide whether Justice and peace shall reign in the affairs of men, whether Right as America conceives it or Dominion as she conceives it shall determine the destinies of mankind. There is, therefore, but one response possible from us: Force, Force to the utmost, Force without stint or limit, the righteous and triumphant Force which shall make Right the law of the world, and cast every selfish dominion down in the dust. 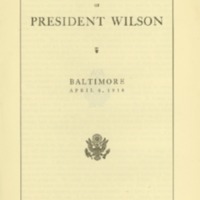