Donated in 2013 by Bouman's granddaughter, Evelina Suhler, and her husband, William

Letters are arranged chronologically in folders by the time and place of assignment, except for the larger group spanning 1927-1928, which is separated into four folders.

Jon Anthony Bouman was born June 17, 1873 in Middelburg, Zeeland, Netherlands. At the age of 20 he joined the United Press, and later worked for the Laffan News Bureau and the New York Sun, London office, until World War I, when he was Associated Press correspondent to The Hague and Amsterdam. He worked in the Paris bureau during the 1919 Peace Conference and in Berlin beginning in 1920 at the time of the Kapp Putsch, and his skill in several languages made him a valuable foreign correspondent. He continued reporting from Germany intermittently through the 20s and 30s, including being present in the ‘liberated’ Rhineland in 1930, meeting Hitler, Goering, Goebbels and others during the Nazi rise to power, and witnessing the “Night of the Long Knives” on June 30, 1934 and Goering’s announcement of the existence of a German Air Force in 1935. Bouman retired in 1939, and died in London in 1958.

The collection begins with a folder of biographical information about Bouman, his family, and his later life, and a folder of letters from his children from 1915-1916. The first set of letters from Bouman to his wife, Ethelwyne, and three children come from Paris during the 1919 Peace Conference, and record some political news, including the presence of President Wilson and other diplomats at various times, but mostly contain domestic concerns both relating to Ethelwyne’s management of the household expenses in London and Bouman’s office life and complaints about the cost of living in post-war Paris due to the effects of inflation and scarcity. These themes are continued in the next set of letters written from Berlin in 1920, beginning with the general strike instigated by the Kapp Putsch and continuing through the Reichstag elections on June 6th. Later letters record even more extreme inflation before the recovery of the German economy to prices similar to those in London. Bouman returned to Berlin for assignments of various lengths in 1921, 1922, 1923, 1926, 1927, 1928, and 1931; in addition are a short assignment to The Hague in 1922, a short trip from Berlin into Lithuania and Poland in 1927, and several to Leipzig, Cologne, East Prussia, and Copenhagen in 1928. The final folder contains a letter to Ethelwyne from her father, W. G. Fearon, in 1919. 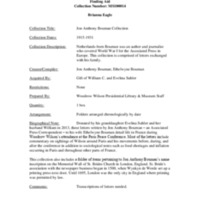