Gentlemen of the Congress: I come to you to-day to discharge a duty which I wish with all my heart I might have been spared; but it is a very clear duty, and therefore I perform it without hesitation or apology. I come to ask very earnestly that additional revenue be provided for the Government.

During the month of August there was, as compared with the corresponding month of last year, a falling off of $10,629,538 in the revenues collected from customs. A continuation of this decrease in the same proportion throughout the current fiscal year would probably mean a loss of customs revenues of from sixty to one hundred millions. I need not tell you to what this falling off is due. It is due, in chief part, not to the reductions recently made in the customs duties, but to the great decrease in importations; and that is due to the extraordinary extent of the industrial area affected by the present war in Europe. Conditions have arisen which no man foresaw; they affect the whole world of commerce and economic production; and they must be faced and dealt with.

It would be very unwise to postpone dealing with them. Delay in such a matter and in the particular circumstances in which we now find ourselves as a nation might involve consequences of the most embarrassing and deplorable sort, for which I, for one, would not care to be responsible. It would be very dangerous in the present circumstances to create a moment’s doubt as to the strength and sufficiency of the Treasury of the United States, its ability to assist, to steady, and sustain the financial operations of the country’s business. If the Treasury is known, or even thought, to be weak, where will be our peace of mind? The whole industrial activity of the country would be chilled and demoralized. Just now the peculiarly difficult financial problems of the moment are being successfully dealt with, with great self-possession and good sense and very sound judgment; but they are only in process of being worked out. If the process of solution is to be completed, no one must be given reason to doubt the solidity and adequacy of the Treasury of the Government which stands behind the whole method by which our difficulties are being met and handled.

The Treasury itself could get along for a considerable period, no doubt, without immediate resort to new sources of taxation. But at what cost to the business of the community? Approximately $75,000,000, a large part of the present Treasury balance, is now on deposit with national banks distributed throughout the country. It is deposited, of course, on call. I need not point out to you what the probable consequences of inconvenience and distress and confusion would be if the diminishing income of the Treasury should make it necessary rapidly to withdraw these deposits. And yet without additional revenue that plainly might become necessary, and the time when it became necessary could not be controlled or determined by the convenience of the business of the country. It would have to be determined by the operations and necessities of the Treasury itself. Such risks are not necessary and ought not to be run. We can not too scrupulously or carefully safeguard a financial situation which is at best, while war continues in Europe, difficult and abnormal. Hesitation and delay are the worst forms of bad policy under such conditions.

And we ought not to borrow. We ought to resort to taxation, however we may regret the necessity of putting additional temporary burdens on our people. To sell bonds would be to make a most untimely and unjustifiable demand on the money market; untimely, because this is manifestly not the time to withdraw working capital from other uses to pay the Government’s bills; unjustifiable, because unnecessary. The country is able to pay any just and reasonable taxes without distress. And to every other form of borrowing, whether for long periods or for short, there is the same objection. These are not the circumstances, this is at this particular moment and in this particular exigency not the market, to borrow large sums of money. What we are seeking is to ease and assist every financial transaction, not to add a single additional embarrassment to the situation. The people of this country are both intelligent and profoundly patriotic. They are ready to meet the present conditions in the right way and to support the Government with generous self-denial. They know and understand, and will be intolerant only of those who dodge responsibility or are not frank with them.

The occasion is not of our own making. We had no part in making it. But it is here. It affects us as directly and palpably almost as if we were participants in the circumstances which gave rise to it. We must accept the inevitable with calm judgment and unruffled spirits, like men accustomed to deal with the unexpected, habituated to take care of themselves, masters of their own affairs and their own fortunes. We shall pay the bill, though we did not deliberately incur it.

In order to meet every demand upon the Treasury without delay or peradventure and in order to keep the Treasury strong, unquestionably strong, and strong throughout the present anxieties, I respectfully urge that an additional revenue of $100,000,000 be raised through internal taxes devised in your wisdom to meet the emergency. The only suggestion I take the liberty of making is that such sources of revenue be chosen as will begin to yield at once and yield with a certain and constant flow.

I can not close without expressing the confidence with which I approach a Congress, with regard to this or any other matter, which has shown so untiring a devotion to public duty, which has responded to the needs of the Nation throughout a long season despite inevitable fatigue and personal sacrifice, and so large a proportion of whose Members have devoted their whole time and energy to the business of the country. 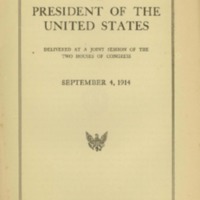