Mr. Mayor, Fellow Citizens: It warms my heart that you should give me such a reception; but it is not of myself that I wish to think to-night, but of those who have just become citizens of the United States.This is the only country in the world which experiences this constant and repeated rebirth. Other countries depend upon the multiplication of their own native people. This country is constantly drinking strength out of new sources by the voluntary association with it of great bodies of strong men and forward-looking women out of other lands. And so by the gift of the free will of independent people it is being constantly renewed from generation to generation by the same process by which it was originally created. It is as if humanity had determined to see to it that this great Nation, founded for the benefit of humanity, should not lack for the allegiance of the people of the world.

You have just taken an oath of allegiance to the United States. Of allegiance to whom? Of allegiance to no one, unless it be God—certainly not of allegiance to those who temporarily represent this great Government. You have taken an oath of allegiance to a great ideal, to a great body of principles, to a great hope of the human race. You have said, “We are going to America not only to earn a living, not only to seek the things which it was more difficult to obtain where we were born, but to help forward the great enterprises of the human spirit—to let men know that everywhere in the world there are men who will cross strange oceans and go where a speech is spoken which is alien to them if they can but satisfy their quest for what their spirits crave; knowing that whatever the speech there is but one longing and utterance of the human heart, and that is for liberty and justice.” And while you bring all countries with you, you come with a purpose of leaving all other countries behind you—bringing what is best of their spirit, but not looking over your shoulders and seeking to perpetuate what you intended to leave behind in them. I certainly would not be one even to suggest that a man cease to love the home of his birth and the nation of his origin—these things are very sacred and ought not to be put out of our hearts—but it is one thing to love the place where you were born and it is another thing to dedicate yourself to the place to which you go. You can not dedicate yourself to America unless you become in every respect and with every purpose of your will thorough Americans. You can not become thorough Americans if you think of yourselves in groups. America does not consist of groups. A man who thinks of himself as belonging to a particular national group in America has not yet become an American, and the man who goes among you to trade upon your nationality is no worthy son to live under the Stars and Stripes.

My urgent advice to you would be, not only always to think first of America, but always, also, to think first of humanity. You do not love humanity if you seek to divide humanity into jealous camps. Humanity can be welded together only by love, by sympathy, by justice, not by jealousy and hatred. I am sorry for the man who seeks to make personal capital out of the passions of his fellow-men. He has lost the touch and ideal of America, for America was created to unite mankind by those passions which lift and not by the passions which separate and debase. We came to America, either ourselves or in the persons of our ancestors, to better the ideals of men, to make them see finer things than they had seen before, to get rid of the things that divide and to make sure of the things that unite. It was but an historical accident no doubt that this great country was called the “United States”; yet I am very thankful that it has that word “United” in its title, and the man who seeks to divide man from man, group from group, interest from interest in this great Union is striking at its very heart.

It is a very interesting circumstance to me, in thinking of those of you who have just sworn allegiance to this great Government, that you were drawn across the ocean by some beckoning finger of hope, by some belief, by some vision of a new kind of justice, by some expectation of a better kind of life. No doubt you have been disappointed in some of us. Some of us are very disappointing. No doubt you have found that justice in the United States goes only with a pure heart and a right purpose as it does everywhere else in the world. No doubt what you found here did not seem touched for you, after all, with the complete beauty of the ideal which you had conceived beforehand. But remember this: If we had grown at all poor in the ideal, you brought some of it with you. A man does not go out to seek the thing that is not in him. A man does not hope for the thing that he does not believe in, and if some of us have forgotten what America believed in, you, at any rate, imported in your own hearts a renewal of the belief. That is the reason that I, for one, make you welcome. If I have in any degree forgotten what America was intended for, I will thank God if you will remind me. I was born in America. You dreamed dreams of what America was to be, and I hope you brought the dreams with you. No man that does not see visions will ever realize any high hope or undertake any high enterprise. Just because you brought dreams with you, America is more likely to realize dreams such as you brought. You are enriching us if you came expecting us to be better than we are.

See, my friends, what that means. It means that Americans must have a consciousness different from the consciousness of every other nation in the world. I am not saying this with even the slightest thought of criticism of other nations. You know how it is with a family. A family gets centered on itself if it is not careful and is less interested in the neighbors than it is in its own members. So a nation that is not constantly renewed out of new sources is apt to have the narrowness and prejudice of a family; whereas, America must have this consciousness, that on all sides it touches elbows and touches hearts with all the nations of mankind. The example of America must be a special example. The example of America must be the example not merely of peace because it will not fight, but of peace because peace is the healing and elevating influence of the world and strife is not. There is such a thing as a man being too proud to fight. There is such a thing as a nation being so right that it does not need to convince others by force that it is right.

When I was asked, therefore, by the Mayor and the committee that accompanied him to come up from Washington to meet this great company of newly admitted citizens, I could not decline the invitation. I ought not to be away from Washington, and yet I feel that it has renewed my spirit as an American to be here. In Washington men tell you so many things every day that are not so, and I like to come and stand in the presence of a great body of my fellow-citizens, whether they have been my fellow-citizens a long time or a short time, and drink, as it were, out of the common fountains with them and go back feeling what you have so generously given me—the sense of your support and of the living vitality in your hearts of the great ideals which have made America the hope of the world. 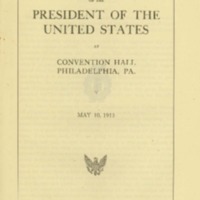