Address of the Unveiling of the Monument to Commodore John Barry

Address of the Unveiling of the Monument to Commodore John Barry

Woodrow Wilson speaks at the dedication of the monument to Commodore John Barry in Washington, DC.

Mr. Secretary, Ladies, and Gentlemen: I esteem it a privilege to be present on this interesting occasion, and I am very much tempted to anticipate some part of what the orators of the day will say about the character of the great man whose memory we celebrate. If I were to attempt an historical address, I might, however, be led too far afield. I am going to take the liberty, therefore, of drawing a few inferences from the significance of this occasion.

I think that we can never be present at a ceremony of this kind, which carries our thought back to the great Revolution, by means of which our Government was set up, without feeling that it is an occasion of reminder, of renewal, of refreshment, when we turn our thoughts again to the great issues which were presented to the little Nation which then asserted its independence to the world; to which it spoke both in eloquent representations of its cause and in the sound of arms, and ask ourselves what it was that these men fought for. No one can turn to the career of Commodore Barry without feeling a touch of the enthusiasm with which he devoted an originating mind to the great cause which he intended to serve, and it behooves us, living in this age when no man can question the power of the Nation, when no man would dare to doubt its right and its determination to act for itself, to ask what it was that filled the hearts of these men when they set the Nation up.

For patriotism, ladies and gentlemen, is in my mind not merely a sentiment. There is a certain effervescence, I suppose, which ought to be permitted to those who allow their hearts to speak in the celebration of the glory and majesty of their country, but the country can have no glory and no majesty unless there be a deep principle and conviction back of the enthusiasm. Patriotism is a principle, not a mere sentiment. No man can be a true patriot who does not feel himself shot through and through with a deep ardor for what his country stands for, what its existence means, what its purpose is declared to be in its history and in its policy. I recall those solemn lines of the poet Tennyson in which he tries to give voice to his conception of what it is that stirs within a nation: “Some sense of duty, something of a faith, some reverence for the laws ourselves have made, some patient force to change them when we will, some civic manhood firm against the crowd;” steadfastness, clearness of purpose, courage, persistency, and that uprightness which comes from the clear thinking of men who wish to serve not themselves but their fellow men.

What does the United States stand for, then, that our hearts should be stirred by the memory of the men who set her Constitution up? John Barry fought, like every other man in the Revolution, in order that America might be free to make her own life without interruption or disturbance from any other quarter. You can sum the whole thing up in that, that America had a right to her own self-determined life; and what are our corollaries from that? You do not have to go back to stir your thoughts again with the issues of the Revolution. Some of the issues of the Revolution were not the cause of it, but merely the occasion for it. There are just as vital things stirring now that concern the existence of the Nation as were stirring then, and every man who worthily stands in this presence should examine himself and see whether he has the full conception of what it means that America should live her own life. Washington saw it when he wrote his farewell address. It was not merely because of passing and transient circumstances that Washington said that we must keep free from entangling alliances. It was because he saw that no country had yet set its face in the same direction in which America had set her face. We can not form alliances with those who are not going our way; and in our might and majesty and in the confidence and definiteness of our own purpose we need not and we should not form alliances with any nation in the world. Those who are right, those who study their consciences in determining their policies, those who hold their honor higher than their advantage, do not need alliances. You need alliances when you are not strong, and you are weak only when you are not true to yourself. You are weak only when you are in the wrong; you are weak only when you are afraid to do the right; you are weak only when you doubt your cause and the majesty of a nation’s might asserted.

There is another corollary. John Barry was an Irishman, but his heart crossed the Atlantic with him. He did not leave it in Ireland. And the test of all of us—for all of us had our origins on the other side of the sea—is whether we will assist in enabling America to live her separate and independent life, retaining our ancient affections, indeed, but determining everything that we do by the interests that exist on this side of the sea. Some Americans need hyphens in their names, because only part of them has come over; but when the whole man has come over, heart and thought and all, the hyphen drops of its own weight out of his name. This man was not an Irish-American; he was an Irishman who became an American. I venture to say if he voted he voted with regard to the questions as they looked on this side of the water and not as they affected the other side; and that is my infallible test of a genuine American, that when he votes or when he acts or when he fights his heart and his thought are centered nowhere but in the emotions and the purposes and the policies of the United States.

This man illustrates for me all the splendid strength which we brought into this country by the magnet of freedom. Men have been drawn to this country by the same thing that has made us love this country—by the opportunity to live their own lives and to think their own thoughts and to let their whole natures expand with the expansion of a free and mighty Nation. We have brought out of the stocks of all the world all the best impulses and have appropriated them and Americanized them and translated them into the glory and majesty of a great country.

So, ladies and gentlemen, when we go out from this presence we ought to take this idea with us that we, too, are devoted to the purpose of enabling America to live her own life, to be the justest, the most progressive, the most honorable, the most enlightened Nation in the world. Any man that touches our honor is our enemy. Any man who stands in the way of the kind of progress which makes for human freedom can not call himself our friend. Any man who does not feel behind him the whole push and rush and compulsion that filled men’s hearts in the time of the Revolution is no American. No man who thinks first of himself and afterwards of his country can call himself an American. America must be enriched by us. We must not live upon her; she must live by means of us.

I, for one, come to this shrine to renew the impulses of American democracy. I would be ashamed of myself if I went away from this place without realizing again that every bit of selfishness must be purged from our policy, that every bit of self-seeking must be purged from our individual consciences, and that we must be great, if we would be great at all, in the light and illumination of the example of men who gave everything that they were and everything that they had to the glory and honor of America. 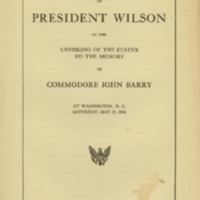