George Herbert Perris writes to Ray Stannard Baker at the Paris Peace Conference requesting he tell the President that Mr. Perris wishes to interview him for “The Daily Chronicle” - a widely read paper in Great Britain.

I have received from the Editor of the “Daily Chronicle” a telegram instructing me to ask President Wilson to do me the honour of according me an interview such as he has been good enough to give to representatives of “The Times” and the “Daily News”; and I should be very much obliged if you could be so kind as to convey this request for me. Our case is somewhat peculiar, and, I think, without any invidious feeling, justifies us in believing “The Daily Chronicle” to be more important at this moment than either of the journals named.

It is peculiarly the organ of Mr Lloyd George and his Liberal supporters. At the same time, it preaches neither to the converted chiefly, nor to a small educated body, but to some 800, 000 plain average Britons. Beyond the “Chronicle” itself, we have a very large syndicate of British, Colonial, and Foreign papers which print my despatches about the Peace Conference—great provincial papers like the “Glasgow Herald and “Liverpool Post”, and others in Canada, Australia, and several foreign countries; in addition to which I may remind you of our close association with the “New York Times”, where my war despatches have regularly appeared. With a circulation of at least two millions daily—to say nothing of our Sunday weekly paper, which sells nearly 1½ million copies—you will see how important it is that I should be fitted to represent adequately the American view.

Perhaps you will not think me vain if I add a word for myself, as there are few if any pressmen here who have been so particularly associated with the development of the ideas which, for the salvation of this Old World, the President has brought to fruition. I was present at both the Hague Conferences, being personally coached thereat by our first envoy, Lord Pauncefote; have made two lecture tours in the United States on these subjects, speaking at the Bioston and New York Peace Confergresses; have written a dozen books and many pamphlets on international problems, including one in the “Home University Library” (New York: Henry Holt), of which I was the founder; was a member of the European Committee of the Carnegie Peace Foundation, and other such bodies; for many years edited the British paper “Concord”; was one of the founders and first hon. secretary of the Anglo-German Friendship Society; and was at Brussels for a last desperate meeting of the International Peace Bureau, when Germany declared war, turning me into a war correspondent.

Forgive this catalogue. I, of course, would not ask the privilege of an interview for myself; but I am sure it would be a means of helping the cause some aspects of which are still not fully or universally understood. 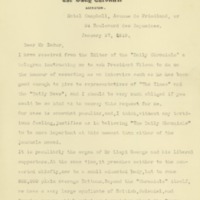