Cary Grayson answers Ray Stannard Baker’s questions about Woodrow Wilson’s cause of death, confirming that it was general arteriosclerosis with hemiplegia and not syphilis or any other disease.

I am sending you herewith a certified copy of the death certificate of Woodrow Wilson issued in the District of Columbia. Date of his death– February 3, 1924, and quoting cause of death– “General arteriosclerosis with hemiplegia;” contributory cause– “Asthenia.”

For your information, the medical dictionary will inform you that Hemiplegia means a loss of sensation or a paralysis of one side of the body. Asthenia is defined as a general debility and loss of strength.

He did not, as is generally reported, have a stroke. He had a Thrombosis, which is a clotting of the blood vessel. A stroke would have been a rupture of the blood vessel, but the symptoms resulting from a thrombosis were very similar to those of a stroke.

President Wilson’s blood was examined a number of times, and as a part of the routine a Noguchi and Wasserman were done. Both were absolutely negative which clearly indicated there was no evidence whatever of Syphilis. Not that he had any symptoms indicating Syphilis– but I thought it was due him, and the medical profession and all parties to have this done. I have never discussed this angle of the case, but as the author of these papers I think it is only fair for you to know that this was done. One of these tests was done at the Naval Medical School under the direction of Rear Admiral Edward R. Stitt– one of the foremost Bacteriologists in the country, known not only as a teacher but as an author.

Concerning yourself, the best Doctor you could consult is the Florida Sunshine. Have a good rest there and work within your own circle of endurance. When you find you are doing too much, cut down your work. It is a sad thing to contemplate but as we grow older, we have to work within our own circumference of energy and when you find you are doing too much, be your own judge as to cutting down and continue to cut down until you are free from symptoms of fatigue. Dont be too proud to repose on your back and relax. A doctor friend of mine once asked an old colored lady, aged 113, the secret of her lengevity. She replied that “she always made it a rule to sit kinda loose.” Dont you be too proud to “loosen” up– mentally and physically.

With all good wishes, 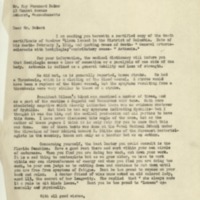