I am going to make a suggestion to you that possibly you may care to bring to the attention of the President, and perhaps you will be good enough to let me know whether you do so or not. I happened to see a list of the Democratic candidates for the Presidency in the New York Sun, and one could not but feel in going over the names that there were not very many of such outstanding ability, character and reputation throughout the country as would seem to qualify them in the present emergency for the high office of President of these United States.

Undoubtedly to all lawyers, the name of John W. Davis makes the greatest appeal but outside of the members of the bar, he is but little known and unless he should impress himself upon the people during the campaign, his nomination would awaken but little enthusiasm.

The Attorney-General, I feel, would have so many enemies among the laboring people, that it would not be possible to elect him.

From among the governors whose names are mentioned, I should suppose that Governor Cox would make the best candidate and possibly carry Ohio and Indiana. But I doubt if he would make much impression upon the eastern states, unless the program of a liberal enforcement of the prohibition law were included in the platform. In that event, there is a possibility that New Jersey, perhaps New York and one or two other states might be carried for him.

Senator Glass is certainly a man of undoubted ability; a man of courage and one upon whom we could look as a person fit for the Presidency. But I do not believe that any Southern Democrat, either Mr. Glass or Mr. Underwood, or any other who is also fitted for the Presidency, would be elected.

I know that there is a very wide feeling among the regular Democrats in this part of the country and in New England, that too many favors have been accorded to the South by the Administration, and any Southerner would receive rather luke—warm support. Vice-President Marshall might carry Ohio and Indiana but I doubt if he would make much impression upon the Republican majorities east of Ohio.

It seems to me, that our best chance is to see whether we cannot be successful in the states west of the Mississippi River. There is undoubredly a great feeling of disappointment in that part of the country at the nomination of Senator Harding, and our best chance of winning, as I view it, would be a candidate that would appeal to the voters out there upon a liberal platform.

It is possible that Mr. Meredith could wage a successful campaign in that part of the country, as he comes from Iowa and would make an appeal to the farmer vote. In North Dakota there is a non-partisan Governor. In South Dakota there were 24,919 votes cast for Governor, non-partisan candidate, 1918. In 1918, 111,948 votes were cast in Minnesota, for a Farmer Labor candidate for Governor. But I do not know enough of Mr. Meredith’s personal qualifications to speak of his real availability. I am therefore, going to suggest to you the name of Mr. Bainbridge Colby. There is no question of the strength of the Progressive feeling in the states west of the Mississippi and Mr. Colby would certainly make a great appeal to the voters there of such tendencies, especially in view of the fact that there is so much discontent over Senator Harding’s nomination.

If the Progressives joined to the DEmocrats voted for him, it would undoubtedly lead to a Democartic victory, and I believe it is necessary to capture the Progressive and Indepentent vote to win. Mr. Colby has great pluck, energy and courage and would certainlly make a fighting campaign which I think is necessary in the present situation. We have got to force the fighting with a platform that does not qequivocate upon the issues, that appeals to the ideals of our countrymen, and should have a candidate who believes in the Napoleonic maxim, “toujours de l’audace”. I do not know Mr. Colby well enough, to feel that I am an altogether competent judge of his intellectual capacities, but I assume that the president would not have chosen him for Secretary of State, unless he had abilities which would enable him to go further.

As to Mr. McAdoom, on account of his close relationship with the President I hesitate to speak at length. I have known him so long and have such a high regard for his ability that I certainly consider that he has every quality to fit him for the presidency. But, as you know, there would be certain prejudice to be overcome and if his chance for the nomineeation should vanish, I believe Mr. Colby is the most available candidate and that he would probably poll a larger vote than any one who could be named.

Of course, the old line Democrats would object to Mr. Colby as being too recent a convert to receive so high an honor. Mr. Bryan would object to his liberal views in regard to Prohibition. But, as I view it we have got to do something out of the ordinary to win and it is for this reason that I make the above suggestion. I deeply regret that I could not have gone to the conventiobn because I feel that this is one of the most important conventions we have ever had. I think I told you that I was a delegate, but on account of my daughter’s death, and Mrs: Allen’s ill health I had to give up going. 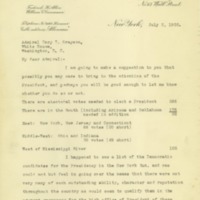