I presume you are feeling a bit anxious to be down here on the firing line. Well I’ll tell you my experience so far and you can judge for yourself whether or not you would like to duplicate it. We arrive here on the 22nd, the day after the fighting began. We landed on the 23rd when the fighting was down to the most desultory sort of sniping. Our men took it very much as a lark and it was very hard to get them to take things seriously. I boarded as battalion Surgeon and was appointed Regimental Surgeon of the 3rd Regiment. The ships force ashore was organized into one Division having two Brigades—a marine Brigade and a naval Brigade. So I was Regimental Surgeon of the third Regiment of the Naval Brigade. We had but 3 regiments in the naval Brigade and I don’t know how many regiments the marines had Spratling had charge of the Hospitals on shore and Elliott was Division Surgeon. Under him were Carpenter as marine Brigade Surgeon and Pryor as naval Brigade Surgeon. After I landed I found that it evidently was not intended for me to go on shore. Elliott asked me how I got ashore. I then began to see that I was up against some of the kind of business you see in Washington. That is I was left of out of the organization entirely and Elliott & Pryor were put in big positions although Pryor did not arrive till the day before we came back to the ships. We all came back April 30th and we are now standing by to go ashore on an hour’s notice. The Federals attack the water works about 8 miles out at 9 o’clock this morning and the Army sent out a support. We could see from the ships the soldiers tromping over the sand dunes on the way to re-inforce. It must have been a hot march and many must have fallen out from the heat. I was ashore just one week and although I saw heard many shot which were evidently hostile I have not the satisfaction of saying that I heard a bullet strike or whiz by. I saw a number of gun shot wounds and a couple or so who were killed by gun fire. I made an effort to get on the track of shell wounds but did not find any or see anyone who had seen any. Some of the killed looked something like shell wounds as they were evidently killed at close range. The Army marched in on the morning of the 30th. The blue jackets and ships marine embarked at 2 pm and it was done in fine style I don’t know who managed 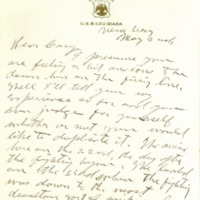