The writer complains about how everything that goes wrong is blamed on Wison.

The President is Blamed for for the failure of every thing. A short crop of Babies would be blamed on him. The Treaty a failure, his appearance in the US Senate a failure. His Trip through the west a dead failure. His whiskey veto a Bad failure. What next.

“When Mr. Wilson returned from France, leaving invitations to the premiers of Europe and some of the kings to come to Washington and tell us how much we liked the League of Nations as framed up, it was assumed in many quarters that ratification would be only a matter of a few weeks. But a brave handful of senators began a stern analysis of the scheme and a pitiless exposure of its entanglements, and now the administraion forces are at a loss as to what to do with the remains.”

—Boston Transcript. Senator John Sharp Williams already has solved the difficulty. He says the “treaty has been wrapped in garments and laid away in the tomb.”

While issues of a local nature to some extent entered into the elections in most of the states on Tuesday, it is clear that underlying the broad results was a deep popular revolt against the Democratic party as controlled by the present national administraion. If Mr. Will Hays and other party leaders indulge in rejoicings over what they term a “Republican year,” who can blame them? The evidence is furnished by the election results. However, Mr. Hays and his associates will make a great mistake if they take unto themselves credit for what has happened. The credit belongs to the Republicans in the Senate of the United States who, unmindful of the fact that the easiest way was that of acquiescence, and contrary to the advice of some of the most noted “pussy-footers” in their party, have stood out for an American treaty and an Americanized covenant. 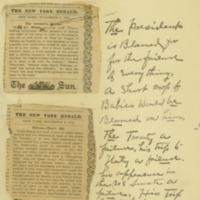