He said that some eight days before, that is on Sept. 25th, he had noticed in the morning that the President’s pillow had been stained by a little saliva. He examined the President’s face and it seemed to be slightly flattened and drooping on the left side but the change was so slight that he was not certain about it and later when he re-examined the face the symptom had disappeared. Notwithstanding the President’s vigorous opposition, Dr. Grayson insisted upon an immediate return to Washington. During the rest on the train the President seemed to improve considerably and after arriving in Washington the gain in strength continued. The President was able to take now and then an automobile ride and an occasional short walk. On the afternoon of October 1st, he had taken a short walk about the White House Grounds. In the evening he had attended a moving picture show at the White House. He had apparently enjoyed the pictures. Dr. Grayson noticed that the President now and then wiped the left side of his mouth with his handkerchief as though there was a slight drooling of saliva.

During the night the President apparently slept well. The next morning, Thursday, October 2nd, on rising from his bed he complained of numbness and weakness of the left leg; in attempting to walk about the room he sank to the floor; this weakness slowly and steadily increased. Finally it involved the left arm and left side of the face. There had been no attack of unconsciousness; there had been none of the symptoms suggesting the sudden onset of a cerebral hemorrhage.

Examined by myself at about 4.30 pm, the President was found in bed. His left leg and left arm were in a condition of complete flaccid paralysis, the lower half of the left side of the face was drooping. The President was conscious though he was somewhat somnolent. He answered questions a trifle slowly, but without evident impairment of articulation and the answers were always entirely responsive.

He was unable to retract the left angle of the mouth as well as the right. The involvement of the face was not as profound as the involvement of the arm and leg. The tongue was protruded in the medium line. In addition there was noted a well marked anæsthesia involving the left side of the face, head, neck, trunk, the left arm and the left leg. The anæsthesia was not sharply delimited by the middle line but faded into hypæsthesia and disappeared upon the trunk within three or four inches of the middle line. Upon the left limbs, especially in the distal portion, the anæsthesia was complete.

The knee jerks were elicited upon both sides; that upon the left side was less marked than that upon the right which was about normal. There was no ankle clonus upon either side. There was a well marked Babinski sign upon the left side. It was noted further that both eyes were directed to the right, i.E. there was present a conjugate deviation to the right. There also appeared to be present an impairment of both visual fields. However, owing to the evident fatigue induced, the fields could not be well outlined. The pupils were unequal, the left was distinctly larger than the right. The left pupil responded feebly to light, the right pupil responded about normally. There was no involvement of the sphincters. There was no rise of temperature. The pulse was regular and full and the respiration was regular and normal in frequency, but perhaps a trifle labored.

A general visceral examination, such as was practicable under the circumstances, was negative, save that the bladder was rather full. An examination of the heart failed to reveal any murmurs or other conditions such as might give rise to embolism. There was no evidence of involvement of the sphincters.

During the examination the President was fully conscious and cooperated with Dr. Dercum; protruded his tongue, retracted the angles of the mouth, showed his teeth, opened and closed his eyes and performed other gestures in response to various requests and directions.

On Saturday, October 4th, the President was visited by Dr. Dercum and Dr. de Schweinitz and examined about 11.30 am Dr. Dercum made another examination confirming the symptoms previously noted. Dr. de Schweinitz could find no hemianopsic fields. Dr. de Schweinitz noted the conditions in the eye grounds to be practically identical with those which he had observed on former occasions. The fact that the left pupil was somewhat larger than the right was in keeping with the greatly impaired vision of this eye; a fact of long standing.

While the eyes when at rest still deviated to the right, the President was not able to rotate them to the left though he did not perform rotation to the left as well as to the right. Speech and mental faculties were as before save that somnolence was not present.

On October 11th, Dr. Dercum again examined the President shortly after 11 am It was now noted that the anæsthesia had markedly lessened; it had disappeared or had been replaced by a moderate degree of hypæsthesia; the latter was more marked upon the distal portions of the arm and leg. The President was able to recognize light impressions with cotton wool upon the affected side though he did not recognize them as readily or as promptly as upon the right side. This improvement in sensation appeared to be quite general.

There was still a marked flaccid palsy of both the arm and leg. The left knee jerk was possibly a little more active than at the previous examination. There was no ankle clonus. A well marked typical Babinski sign was present. The tendon reflexes in the left arm could not be elicited. It was stated by Miss Harkins, the nurse in chief, that the President had at various times moved his left arm, carrying it to his face and also that he had at various times moved his left leg. At this point the President interrupted Miss Harkins saying that the movement of the left leg was “purely mechanical”; presumably the President meant “automatic” and that the movements were independent of his volition. Upon my requesting the President to move the affected members, he was unable to comply. Speech and mental faculties as before. Sphincters as before. The bladder was quite full though the record revealed that a normal amount of urine had been voided.

THE DIAGNOSIS made on October 2nd and confirmed at the subsequent examinations was that of a severe organic hemiplegia, probably due to a thrombosis of the middle cerebral artery of the right hemisphere. An ingravescent hemorrhage was deemed unlikely because of the extremely gradual onset, the final arrest of progress of the symptoms, the absence of marked disturbance of respiration and of consciousness and further because ingravescent hemorrhages are usually continuously progressive and finally fatal; an increasing impairment of consciousness, coma and marked respiratory disturbances preceding the outcome. It should be added that Dr. Grayson’s statements concerning the urine excluded a uræmic attack as did also the symptoms presented by the patient.

At the time of the first consultation, the diagnosis was communicated to Mrs. Wilson and Miss Margaret Wilson. The subsequent course of the case revealed the hemiplegia to be persistent. Notwithstanding, because of the improvement noted at various times, Dr. Grayson thought it wise to issue general statements only.

The President was visited October 18th, 4.20 pm Little change was noted in the nervous symptoms. The motor hemiplegia was as marked as before. No history of the arm or leg having been moved voluntarily by the patient since the previous examination could be elicited. The knee jerk upon the left side was a little more pronounced than at the last examination. There was also present a faint disappearing ankle clonus. A Babinski sign was present as before. A biceps reflex was now also elicited upon the left side. It was quite decided. None was elicted upon the right side. The President stated that the test for the biceps reflex upon the left side caused him pain, although the tapping upon the biceps tendon was very light and was done with the finger. The President now volunteered the statement that he had a painful or disagreeable tingling in the left arm and left leg.

Sensation was apparently still further improved. The sensory impairment still present included all forms of sensation. The President was able to differentiate to some extent between superficial and deep pressure. It can be readily understood that elaborate studies of the sensation were out of the question as the President became very readily fatigued.

Conjugate deviation of the eyes were at this examination not a feature of the case, although the President allowed the eyes to turn - - while at rest - - to the right. He could, however, when requested rotate them quite well to the left. The pupils though perhaps a trifle smaller than noted previously, revealed no new peculiarities.

Mentally the patient was as at the last examination. He answered questions readily, cheerfully and accurately. At one time when I spoke of the abdominal muscles, he smiled and said those “abominable” muscles.

After my examination had been concluded, the President’s bladder was examined by Drs. Young and Fowler. They expressed themselves as satisfied with the amount of urine that had been passed and with the cognate conditions. I was not present during their examination. Miss Harkins, the nurse in chief, stated in regard to the sphincters that the patient did not inform her of a bowel movement until after it had occurred; that he did not seem to be conscious of the desire to move the bowels, did not control the bowels, and did not speak of the bowel movement until after it had occurred.

Dr. Fowler stated that when he had introduced a suppository into the bowel, the sphincter did not grasp the finger; and that the sphincter was evidently weakened. Both Drs. Fowler and Young were unable to express an opinion as to the sphincter of the bladder, inasmuch as the difficulty in voiding the urine due to the enlarged prostate masked the condition.

At the subsequent conference in which Drs. Grayson, Ruffin, Fowler, Young, Stitt and myself participated, Admiral Stitt expressed uneasiness at a fall in the amount of urea eliminated. He also reported that a Wasserman of the blood had proved negative.

At the time of the first examination, October 2nd, by Dr. Dercum, Dr. Grayson and Miss Harkins were present in the sick room. Admiral Stitt and Dr. Sterling Ruffin of Washington subsequently took part in a conference held in a separate room.

At the second examination by Dr. Dercum, October 4th, Dr. Grayson, Dr. de Schweinitz, Miss Harkins and the assistant nurse were present in the sick room. Subsequently a conference was held in a separate room in which Admiral Stitt participated.

At the examination, October 11th, by Dr. Dercum, Mrs. Wilson, Miss Margaret Wilson, Dr. Grayson, Miss Harkins and the assistant nurse were present in the sick room. Subsequently a conference was held in a separate room in which Admiral Stitt and Dr. Sterling Ruffin participated.

During my examination on October 18th, Mrs. Wilson, Dr. Grayson and Miss Harkins were present. 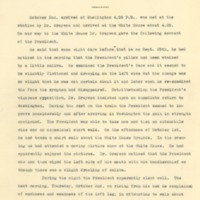