An announcement calling for a meeting of the Entertainment Committee.

The Committee will plan the entertainment for the Twenty-Fifth Anniversary Dinner of the CLUB, which will be given on January 15, 1938.

Mr. Brahany has appointed as the members of the Committee, the following members of the CLUB to assist him in making the program everything that the Anniversary deserves, this being official notice of appointment.

After the business of the Committee shall have been completed, a Buffet Supper will be served, along with abundant refreshments, the host being the newly-elected member of the Committee, Robert V. Fleming, which presages a good attendance.

The Chairman of the Entertainment Commitee most cordially invites the Board of Managers to attend the meeting of his Committee and assist in every possible way to make the Annual Dinner a realy enjoyable affair. 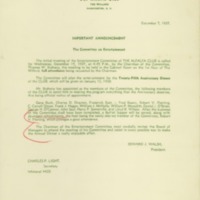