A revised announcement about the 25th anniversary Alfalfa Club dinner.

The annual dinner of THE ALFALFA CLUB will be given in the large ballroom of The Willard, on Saturday evening, January 15, 1938, promptly at seven thirty o’clock. As it will be the Twenty-Fifth Anniversary Dinner of the CLUB, there is already an unusual desire for plates, making it necessary to limit the number of plates to each member, not to exceed five, including his own. Any deviation from this number, will be allowed if possible.

At the annual meeting of the CLUB held on Tuesday, November 23, 1937, at five o’clock, at the home of Rear Admiral Cary T. Grayson, 3825 Wisconsin Avenue, the following were elected as officers of the CLUB for the year 1938: with the following members to constitute the BOARD OF MANAGERS The President of the CLUB has appointed Thomas W. Brahany the Chairman of the Committee on Entertainment, William Payne Meredith the Sergeant at Arms, and George H. O’Connor the Water Boy. Mr Brahany will have associated with those members who are the possessors of exceptional entertaining flairs. Mr. Buck’s contribution to the evening’s entertainment will be in the superlative as usual.

Note: On account of an omission, discard the announcement of November 24, 1937. 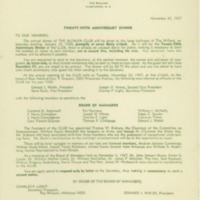