Details how promotions and assignments will be made in the Navy Medical Corps.

Be it enacted by the Senate and House of Representatives of the United States of America in Congress assembled, That the President of the United States is hereby authorized to appoint and commission, by and with the advice and consent of the Senate, officers in the existing Hospital Corps of the Navy, in addition to chief pharmacists and pharmacists, at the rate of one for each two thousand of the total authorized number of officers and enlisted men of the Navy and Marine Corps, with ranks of lieutenant commander, lieutenant, lieutenant (junior grade), and ensign, which ranks are hereby established in the Hospital Corps, who shall perform such duties in the Hospital Corps, as part of the Medical Department of the Navy, as may be prescribed by the Secretary of the Navy. Original appointments to fill vacancies shall be made in the rank of ensign, Hospital Corps, United States Navy, by selection from the total number of chief pharmacists and pharmacists, United States Navy, subject to the laws governing examinations for promotion, the board of selection for naval medical officers, whenever convened to constitute a board for this purpose. Officers so appointed shall, after serving as ensign, Hospital Corps, United States Navy, for three years, be eligible for promotion to the rank of lieutenant (junior grade), Hospital Corps, United States Navy, subject to the laws governing examination for promotion, and when so promoted shall take rank and precedence with officers of the Naval Medical Corps of the same rank according to the dates of their respective commissions, and thereafter shall be eligible for advancement in rank to and including the rank of lieutenant commander in the same manner and under the same conditions as officers of the Naval Medical Corps with or next after whom they take precedence, and all commissioned officers appointed under the provisions of this act shall receive the same pay and allowances as officers of corresponding rank and length of service in the Navy: Provided, That officers of the Hospital Corps of the Navy who shall have gained or lost numbers on the Navy list shall be considered to have gained or lost service accordingly. All commissioned officers provided for in this act, shall become eligible for retirement in the same manner and under the same conditions as now prescribed by law for officers of the Naval Medical Corps, except that section 1445, Revised Statutes of the United States, shall not be applicable to these officers: Provided further, That all chief pharmacists and pharmacists appointed assistant surgeons (temporary) United States Navy, pursuant to an Act of Congress approved May 22, 1917, volume 40, Statutes at Large, page 84, entitled “An act to temporarily increase the commissioned and warrant and enlisted strength of the Navy and Marine Corps, and for other purposes”, as amended, shall, upon the passage of this act, be eligible for selection for transfer to and appointment in the permanent Navy in the ranks in the Hospital Corps established by this act for which they may be found qualified, under the same conditions except as to limitation in number as may be authorized for other temporary officers, and those so transferred to ranks below lieutenant commander shall thereafter be eligible for promotion in accordance with the provisions of this act: Provided further, That Officers so commissioned in the Hospital Corps of the Navy shall retain the precedence with officers of the Naval Medical Corps that they held as temporary assistant surgeon, except that officers commissioned in a lower rank than that held by them in the temporary Navy shall be given a date of precedence as determined by the Secretary of the Navy. And provided further, That nothing herein contained shall be construed to legislate out of the service any officer now in the Medical Department of the Navy or to reduce the rank, pay, or allowances now authorized by law for any officer of the Navy. 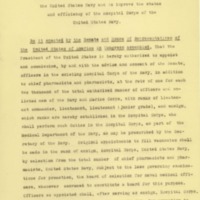