H. Ashley daCosta writes a letter to the editor of the "New York World" calling for the impeachment of senators who opposed the League of Nations.

Sir,
Will you please inform me how and why a United States Senator can be impeached? Is it necessary for the impeachment to come from the Senate, his own State, or can he be impeached by a citizen or citizens of other States than his own—?

It seems to me that if ever men deserved to be impeached and punished, those Senators who have up to now wrecked the Treaty of the League of Nations in this country richly deserve that penalty, but apparently men of influence and position can do just as they please with impunity in America.

It must certainly be apparent to every one with a particle of common sense, that the reasons given by these miscreants for their infamous action, are mere subterfuges, and that they have been actuated by petty spite to punish (?) President Wilson for what they regard as his ignoring of them and their rights in the matter of the Treaty, or perhaps, some of these traitors have been bought and paid for by the Sinn Fein—pro-German Party—men like Henry Clay, who “would rather be right than President” are indeed dead departed. How disappointing that Senators Lodge and Knox who were generally regarded as being above reproach and above suspicion should so falsify their reputation. Of Senators Borah and Johnson nothing better could be expected—Those who have voted against the Treaty care not what the results of that action will be. Their nests are well feathered and their skins are safe. They are fully aware that their action serves to continue and further increase the want, distress and even crimes, that the failure to declare peace has created among the millions who starve in consequence of the unsettled conditions that exist and will continue to exist until peace is declared—If these men are not responsible in the sight of Heaven for these conditions and crimes that they could put a stop to and would not, then no one is responsible for anything. There is even danger that the failure to of America to ratify the Treaty may encourage Germany to renew the bloody war and carnage that has just ended. —If each and every one of them is not false to his oaths of office and guilty of betraying his country for the sake of petty spite or filthy lucre, thereby meriting the fate of Bolo Pasha, then no one merits that fate.

Examine the falsity of their arguments so disguised to gull the ignorant.

They claim that the Treaty violates George Washington’s policy of non-interference with outside matters.

(1.) During the 140 years that have elapsed since George Washington’s days, changes have taken place, which, if he were alive today, would cause a man of his intelligence to change his views with regard to that point— 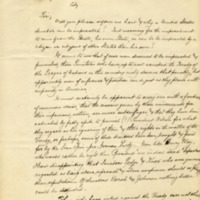