Educational Campaign in Behalf of Legalized Racing in Texas

Educational Campaign in Behalf of Legalized Racing in Texas

Outline of proposed publicity and educational campaign in behalf of legalized racing in Texas:

This campaign contemplates the utilization of the newspapers, magazines, agricultural press and other channels of publicity to acquaint the people of Texas with the pleasures and economic advantages to be derived from racing properly conducted by reputable racing organizations under state supervision, stressing:

1. The exhilirating sport racing affords to hundreds of thousands of persons throughout the country.

2. The benefits accruing to the state in better roads, better schools and better public improvements generally where the sport is legalized and reasonably taxed, and the stimulus it gives to local agriculture and breeding.

3. The economic contribution the sport is making to the general improvement of the horse-breeding industry everywhere in quickening interest in all horse activities, which is creating an expanding market for horses of all kinds.

4. The benefits the farmer is deriving from this thriving industry which is supplying a growing market for his products, and the additional opportunity of easing his economic load by breeding a few good horses each year for the market. Many farmers are now meeting all of their operating expenses or a large percentage of them from the sale of the horses they are breeding.

5. The advertising value of racing to the community and state.

6. The importance of racing to the National Defense in building up a reserve of first-rate horses for use in case of emergency. The majority of the stallions used by the War Department in its breeding program which is designed primarily to strengthen our Cavalry, are Thoroughbreds whose speed, stamina, tractability and other qualifications desired in Cavalry mounts, have been tested on the race course.

It is proposed to cover these subjects in a series of suitable articles, appropriately illustrated, that will be released regularly to the daily, weekly and agricultural press and other publications in the state, and to arrange for their discussion over the radio by speakers of recognized authority or standing in the community, tying up the broadcasts with newspaper publicity.

As an example one of the articles will be about Vice President Curtis and his love of the sport which will feature his early days as a rider on the half-mile tracks of Texas, his reminiscences about the “good old days,” what he thinks of racing as it is now conducted, etc. An article of this character has a universal appeal and will do much toward creating public sentiment for the sport.

Other articles will include interviews with experts of the Department of Agriculture, and officials of the agricultural departments in states where racing is legalized, on the economic benefits of horse racing to the farmer. The point will be stressed that the constantly increasing demand for good horses for which the sport is largely responsible is proving a boon to enterprising farmers who have taken up horse-breeding. Articles from farmers themselves covering this subject also will be obtained. These articles should do much to win the farmers’ support.

Government officials and others qualified to speak on this subject also will be interviewed on the recreational value of racing. In this connection, letters from the Secretary of War and the Secretary of Agriculture are available which could be used with excellent effect.

The important relation the sport bears to the National Defense will be exploited in a series of articles by War Department officials and officers who have charge of the government breeding projects.

State Officials of Maryland, Kentucky and Illinois, and prominent business men, bankers, ministers and leading citizens in these states will be interviewed on the benefits the State derives from legalized racing, and the impetus it provides to agriculture, and business and its advertising value to the community. Governor Ritchie of Maryland, particularly, has made several public statements on horse racing which could be used to great advantage in this campaign.

Statements will be obtained and circulated from representative citizens of Texas favorable to legalized racing; to interest women, there will be stories of women who breed, own and race horse; the Texas delegation in Congress will be canvassed for favorable statements; there will be articles on the suitability of Texas for horse breeding as emphasized by the fact that the government maintains more stallions in Texas than any other state; and there will be a multitude of other articles on topics of kindred nature all calculated to instil public interest in the sport and public sentiment for racing legislation.

The Department of Agriculture has available two educational motion pictures devoted to the horse which could be employed to advantage in this work, and arrangements could be made at a small cost to show them throughout the State. In the use of motion pictures it also may be found advisable to produce privately talking pictures featuring some national figure or leading citizen of the state in a short speech advocating the sport and legislation legalizing it.

This part of the campaign proposes a series of broadcasts covering generally the subjects to be treated in the matter released to the press, the broadcasts to be made by individuals of prominence whose words will carry weight with the audience they address, but details of this feature must be worked out until the appropriation for the work is determined.

As a feature of this campaign, it is proposed to organize the breeders of the state who have availed themselves of the services of government stallions in behalf of legislation to legalize the sport. The government maintains 127 stallions (mostly Thoroughbreds) in Texas. Since the Government launched its breeding program, it is estimated that 40,000 breeders in the state have sent mares to these stallions. A large percentage of the names of these breeders is available or could be obtained by research. It should not be difficult under the circumstances to induce them to urge their representatives in the Legislature to support proper racing legislation. All of them are potential friends of the Thoroughbred, and properly organized would be a powerful force in favor of racing.

It is estimated that to conduct this campaign properly—and it should not be undertaken on a niggardly basis if it is to be effective—for the remainder of the year from March 1, allowing for the employment of experienced writers to prepare the publicity, clerical help, charges for making photographs and matrix, mailing, telegraph, travel and other items, would be $30,000.00 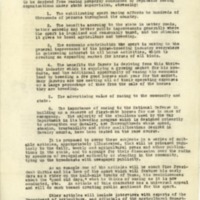