A BILL PROPOSED FOR THE AID OF COUNTY, DISTRICT AND STATE FAIR ASSOCIATIONS, FARMERS AND LIVESTOCK BREEDERS

Be It Enacted by the Legislature of the State of Texas:Sec. 1. The Board hereinafter named in Section Fourteen of this Act shall have the power, and it shall be its duty, on written application, to authorize bona fide County, District and State Fair Associations of Texas, and bona fide farmers or livestock raisers, citizens and residents of Texas so actually engaged in Texas, each for the purpose of this Act designated an Association, to hold, under the rules of the Board, public exhibitions of farm, dairy, poultry and agricultural products and livestock, or any one or more of them, and to conduct contests with respect thereto.

Animals so entered in such contests shall be designated by number and (or) name.

Sec. 2. There shall be separate classifications made by such Associations for the purpose of contests in respect to: (a) Poultry and poultry products; (b) Dairy products; (c) All kinds of livestock; (d) Farm products.

Sec. 3. In contests, between horses, of speed, breeding and endurance, which contests are hereby declared to be lawful, and may be conducted under the provisions of this Law, the Association shall have the power to solicit and receive donations or contributions of money from any person or persons toward the entry of any horse selected by such person or persons as a first, second or third successful contender, respectively, in any such contest so authorized, and the person or persons so contributing shall acquire an interest in the total so contributed as to first, second or third successful contender, respectively, in proportion to the amount of money contributed by him. Such Association shall receive said contributions of money and issue to the contributors thereof receipts therefor which shall designate the particular contest by number, the amount contributed, and the number and name of the horse selected by such person as first, second or third successful contender in such contest.

Sec. 4. The Board shall have the power within its discretion to limit, in the license issued, donations or contributions from any one person toward the entry of any animal as a first, second or third contender to an amount not exceeding one hundred dollars as to any one place in any one contest.

Sec. 5. As each particular contest authorized under Section Two hereof is ended, the Association shall have the power to, and is authorized to deduct from such contributions so raised, accepted and retained a reasonable amount, not less than seven per cent nor more than ten per cent, the exact percentage within these limits to be fixed by the Board and specified in the license issued, which percentage the Association shall retain for distribution as hereinafter provided. The balance of such contributions as to contests authorized under Section Two hereof, shall be paid over to the entrants of animals as purchase money for animals sold under the provisions of Section Two.

As to contests conducted under Section Three hereof, the balance shall be paid out to the holders of receipts on the successful animal in such contest equally in proportion as the amount contributed by such person bears to the total amount contributed toward the entry of all horses in said contest as first, second or third contenders, respectively.

Sec. 7. Each Association so conducting contests as provided for in either Section Two or Section Three hereof, shall first give bond in the sum of Five Thousand Dollars, payable to the County Judge of the County where such exhibitions are given, the sufficiency of such bond to be approved by him, for the use and benefit of the contributors to such fund; conditioned that such contests shall be fairly conducted and that such Association shall faithfully account for and pay over as agreed such contributions and donations received by it.

Sec. 8. No Association authorized hereunder to conduct such exhibitionsor contests shall be authorized so to do without first obtaining a license from the Board, which it shall be the duty of the Board, on application in writing therefor, to issue, and for which the Board shall charge a license fee of fifty dollars, which license shall be in force for the calendar year in which issued, provided that where such exhibition or contest is to be held in a County of more than 150,000 population, such license shall be Five Hundred Dollars.

No horse shall be permitted to enter or engage in such contest unless the one who rides, drives or exhibits such horse shall have first obtained a license from the Board, which shall expire on the thirty-first day of December of each year, for which license there shall be paid a fee of Five Dollars, and a like amount for any renewal thereof. For good cause, to be given the applicant for license, or the holder of the license after issued, the Board shall have the discretion to deny the issuance of such license or to cancel it after issuance.

The Board shall adopt in writing, make public and faithfully enforce rules and regulations that will insure fairness in conducting such contests and that will protect against wrongful or unlawful conduct or practices of every kind on the grounds of such Association or in connection with such exhibitions.

Sec. 9. The Board is charged with the duty of enforcing, and is empowered to enforce such rules and regulations and to supervise the integrity and fairness of contests, and, to that end, is authorized, at its discretion, to appoint such agent or agents as it may deem necessary, who shall, if requested by the Board, be personally present to see to it that contests authorized hereunder are conducted as here stated, and to enforce the rules and regulations adopted by the Board.

Sec. 10. No license shall be granted to any one Association for exhibitions for more than thirty days (Sundays excepted) in any one year, nor shall such license granted hereunder authorize the holding of a contest on Sunday.

Sec. 11. Such Association shall pay to the Board a tax of two per cent of all money contributed, donated and accepted as herein provided, out of which the Board shall pay the expense of agents as provided for in Section Nine hereof and the expenses of the Board as provided for in Section Fourteen hereof, after having first applied thereto license fees collected; and the balance of said money shall constitute and be a fund for the sole use of aiding, assisting and encouraging the farming, livestock, poultry and dairying industries of this State, which shall include, among other things, the purchase by the Commissioners’ Courts of the several Counties of seed, and its free distribution, and the purchase and maintenance by such Courts of such Counties of pure bred bulls and cows, studs and mares, sheep, goats and hogs, and poultry, and their distribution for breeding purposes, free of all charge for the service thereof.

Sec. 12. The remainder of said money so donated to each respective Association after the payment of the said two per cent shall be retained by such respective Association to be used by it for defraying the actual and reasonable cost and expense theretofore or thereafter incurred in providing lands by purchase or lease for the holding of such exhibitions, providing, equipping and maintaining buildings and such other facilities of any kind needed or used for such exhibitions, and the necessary operating expenses thereof after so provided, and also expense of conducting such fairs and exhibitions, including the paying of purses and premiums for farm, poultry, livestock and dairy exhibits. No part of the funds received by said Associations under the provisions of this Section Twelve shall be used for the payment of dividends or for any other purposes than as herein stated.

Sec. 14. The Board herein provided for shall be constituted by the Commissioner of Agriculture of the State of Texas, who shall be Chairman, and the respective Presidents of the Agricultural and Mechanical College of Texas, located at College Station in Brazos County, and of the Texas College of Arts and Industries, located in the City of Kingsville, Kleberg County, which officials shall be ex officio members of such Board, and two other persons, to be appointed by the Governor of Texas for a term of two years, one of whom shall be a person who at the time of his appointment is, and for at least twelve months prior thereto, has been a bona fide farmer, living on his farm, the other shall be a person who is, and for that length of time has been a member of the American Legion or of the Texas National Guard.

The members of the Board shall serve without compensation except a reasonable amount for attending meetings of the Board and their necessary expenses incident thereto.

The Board is authorized to pay such other actual and reasonable expenses as are necessarily incurred in the conducting of the business of the Board, including pay for services, and expenses of agents appointed to perform the duties of such agents as authorized by this Act.

Sec. 15. Said Board shall maintain its principal office at the City of Austin, Texas, but may meet at such times and places within the State of Texas as the Board shall determine. The Board shall hold an annual meeting at its principal office on the last Tuesday in March of each year. Three members of the Board shall constitute a quorum for the transaction of business, except no rules or any alterations or amendments thereof shall be adopted as provided for in Section Eight of this Act, except at the annual meeting, or at a meeting at which all five members are present, or have had five days notice in writing of the time, place and purpose of such meeting.

Sec. 16. The Board shall keep such accounts and records as shall accurately show the amounts collected and disbursed by it, and a detailed record of the expenditures made. It shall make an annual report to the Governor within ten days after its annual meeting, setting forth the amounts so collected, the source from which collected, the expenditures made, when and how made, and any other facts which, in the opinion of the Board, would tend to show the result of the operation of this Law.

The clerical work required by the Board to be done shall be done in the office of the Commissioner of Agriculture and under his direction.

Sec. 19. All laws and parts of laws in conflict herewith are repealed. 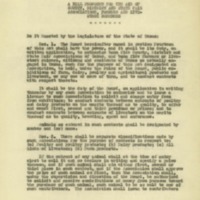