A member of Admiral William S. Benson's staff notifies Cary T. Grayson that the USS George Washington has left New York, and asks for a list of persons authorized to accompany President Wilson on the U.S.S. George Washington's voyage to the United States.

Whenever you get a line on approximately when the President will desire to leave, I would like to give the information confidentially to the commanding officer, in order that he may plan accordingly.

I would also like to run over with you as soon as convenient the preliminary list of people who will be permitted on board the George Washington, exclusive of Army passengers allowed. 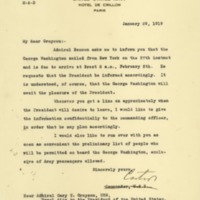