Received your letter of the 19th and also your telegram of the 27th. On the strength of the latter I have had them call off the protest meeting that they contemplated.

We are going to have an interesting dinner on of which I enclose you a notice, but we will devote ourselves entirely to welcoming the representatives of the middle European States and to appealing for help and for funds for the Near East Relief.

I am delighted that the President is progressing so nicely. I have no intention of going to Washington at present as there is nothing for me to attend to there. It has occurred to me lately that perhaps the President would not be unwilling to run again for office. If so, it would seem to me that if Herbert Hoover could be induced to accept the Vice Presidency, the ticket of Wilson and Hoover would be unquestionably be elected. It would give the President the vindication he is entitled to and the tremendous satisfaction of proving to the world and the American people themselves that they are not unmindful of the magnificent stand taken by the President in the Treaty negotiations.

I personally am chafing a little bit with restlessness from not having any active task and that is the reason why I should like to re-enter diplomatic life. I met Mr. Joseph M. Guffy this morning and he informed me of the present conditions in Mexico. He is convinced that the President’s policy in refusing to intervene is correct and that Carranza has successfully administered the affairs of the Republic. Would it not be very wise and advantagous for the Mexicans and the President to have a representative there who is a trained observer and knows how to express hie observations and has the confidence of the public, so that the real facts uncolored by prejudice can be presented at an early date. I have always believed that the President was very wise in allowing the mexicans to work out their own salvation and if they have made the progress that men like Guffy and Henry Bruere state they have, and such information is properly presented to the American people, it would go a great waty towards convincing them of the wisdom of the President’s course.

I thought it best to present my request direct to the President and therefore ask you to kindly hand him the enclosed letter.

With kindest personal regards to Mrs. Grayson and yourself, 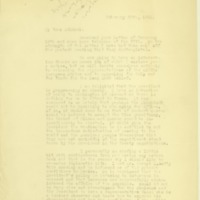