Ralph Hayes writes Cary T. Grayson to ask that a confidential copy of the treaty of Versailles be given to Newton D. Baker when he leaves for America.

The Secretary of War left Paris this morning to remain in the Field with the Army until April 26th. After his return here, he plans to leave for Brest, almost immediately, sailing on the 28th or 29th.

I make a random suggestion on the assumption that the Peace Treaty will be made public while he is on the Ocean - that is, at a time when it will be inaccessible to him. Since there will be no little missionary work to be done in America immediately after the publication of the treaty; since the Secretary of War will naturally be the target for many inquiries immediately upon his reaching the United States; and since the treaty is of such formidable length, do you think it wise to suggest that, if the final form of the treaty has been agreed upon by the time the Secretary leaves, a confidential copy of it be given to him for his study while on the Ocean? On his arrival in the States he might be the better prepared to assist in the work of interpretation, which will precede the ratification. All of this, I repeat, is on the possibly erroneous assumption that the treaty will have gone to the world by the time he reaches America, but will not have been given out generally at the time he embarks from France. Do you think it proper to speak to the President about it? 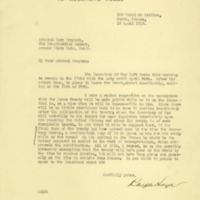