Dr. Grayson writes to his wife about visiting Mrs. Brower, Helen Bone’s sister, to treat her cold. He also references the YMCA and a formal dinner he attended in Paris.

I have spent most of the day writing letters. This morning I went to the hotel Castile to see Mrs. Brower—Miss Helen’s sister—who is sick with a bad cold. She is connected with the YMCA. This organization is in bad over here, owing to the finances—The soldiers say that YMCA stands for You Must Come Across—with your money and the exact change or there is nothing doing.

In the afternoon I had quite a conference with Colonel House, & BMB later on. On the quiet will give you a little gossip about Gordon Auchincloss when I return. Young Billy McAdoo is returning home in a few days. I tried to see him to-day. He has had nothing to do and has been hard for him to keep out of mischief—The Colonel told Miss Edith that he did not bring him here.

To-night the President, Miss Edith & I went to a big dinner given by the Secretary of State & Mrs. Lansing, Mrs. House is in getting in worse all the time with WW & EBW.

Mrs. Harriman is here as busy as ever. To-day she cornered me, saying that she heard that strong pressure was being brought to bear on the President to appoint Hugh Wallace here in place of Sharp. That would be an outrage. That he drank heavily—was wooden etc. That Fletcher was the ideal man. I think that I looked interested, but innocent—I listened attentively. Later on the Colonel said see if you cannot put in a word and find out who the President is going to appoint. I don’t think WW has mentioned, he was appointing Hugh, to any one.

I hope all is all right which you, my precious. I wish so much that you were here. I miss you terribly. We expect to sail about the for home, I shall be happy when I reach 1600—believe me—Good night, and a thousand kisses. 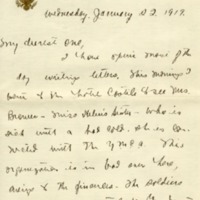