Their Husbands Were Presidents

Their Husbands Were Presidents

ME Hennessy writes a brief account of Woodrow Wilson’s widow, Edith Bolling Wilson who was one of six living presidential widows.

There Are No Ex-Presidents; But Six Widows Survive

TRIAL and sorrow have visited Mrs. Woodrow Wilson, the widow of President Wilson, but she is still an attractive woman in her 61st year. She was the widow of a wealthy Washington jeweler when she became the second wife of President Wilson. After the death of the first Mrs. Wilson, the President was a lonely figure in the White House. Close friends feared for his health. It was at this stage of his life that the beautiful and accomplished Mrs Edith Bolling Galt appeared at the White House, sponsored by Miss Bones, a cousin of the Wilsons, who had been the private secretary of his dead wife, and Admiral Grayson, the White House physicians, Virginians all.

She was stunning looking, beautifully gowned, an accomplished musician, a brilliant conversationalist, with the poise of Virginia “First Families.” Born at Wytheville, Va, , she had been educated in private schools and in her early 20’s was married to Norman Galt, who provided her a Washington fine home and left her at his death an ample fortune.

President Wilson fell in love with her. She became a frequent dinner guest at the White House and was invited on automobile rides with the President, Admiral Grayson and Miss Bones. Pretty soon a White House car was seen in front of her house. The neighbors began to talk and they watched the evening calls of the President of the United States, food for wagging tongues. Before long their engagement was announced and in a little more than a year after the death of the first Mrs Wilson, they were married.

As mistress of the White House she measured up to the standard set by the long list of distinguished women who had presided over the old mansion. She was Mr Wilson’s devoted and faithful nurse during his long illness. I recall her solicitude for his health and how she watched every move on his transcontinental trip in defense of the League of Nations—her all-night vigil at his bedside as the train sped back to Washington following his breakdown after his Pueblo speech. He wept like a child as she did everything she could to ease the terrific headache he suffered. With soothing words and caresses she assured him that the pain would soon pass, and once back in the White House, he could rest and mend his shattered nerves and broken body.

I recall an afternoon tea she gave at the White House to the newspaper men who accompanied her husband on that trip; how admirably she concealed her fears, but confiding to a few of us the seriousness of “the Governor’s” condition. After his breakdown in Paris during the peace negotiations, she realized that her husband was a very sick man, and for that reason never left him longer than necessary and always accompanied him on his journeys. She was nurse, counselor and confidant in all things, filling each role with rare tact and ability. She still lives in the house on St st, where Woodrow Wilson spent his last days.

Every year she attends the opening session of the League of Nations in Geneva. She takes an active part in promoting the success of the Democratic party. In 1928 she came home from Europe to vote for Al Smith, and at the last Democratic convention in Chicago sat through the all-night session, munching a sandwich at 4:30 a m with other occupants of her box. She was the chief guest at the unveiling of a statue of Mr Wilson in Warsaw, erected by the Poles in memory of the American President who had done so much for their independence. Recently she toured China and Japan, traveling, as always, inconspicuously and unheralded. 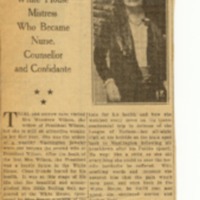