The Collapse and Awakening of Germany in Seven Months

The Collapse and Awakening of Germany in Seven Months

How was that possible?


The Militarism-made and Kaiser-made Germans had crushed a few neighbor nations and drew wealth and war taxes from them. Among these was Great Russia. The war strength of the German Empire and the Teutonic powers had apparently grown since the declaration of war, considerably more than had the  of the Allied Nations, except for the entrance of the  into the ranks of the Allied forces.

This was the situation when the German great drive on  was opened last spring. Without  taking a vigorous hand the already upperhanded Teutons would probably, doubtless – been victors. And yet our  did not have a great number of soldiers in France last Spring or foresummer as compared with the number of soldiers the other great nations had there. The  and his  did not fear the Yankees then because could not be changed into a military power over night, as the enemy thought and the U boats would sink their ships.

The Yankees were not many on the battle fronts but where they were, were looked upon as superier men with the goods with them. They were asked for by England, France, and Italy, not so much because of their immediate great numbers as because wherever they were the army vitality would rise automatically and offset the hard pressing German, Fritzie. This is clear, and if the German and Teuton morale and cause of fighting had not sunk, the war might have been kept up for years.The  and his advisers doubtessly saw this, but they were powerless before the U. S. A.vitality stores. The ‘s soldiers were trained  as military science can do it, but America’s sons are greater than physical man. Most everybody here knows what the American mill will do and the Yankees grow wonderfully big, bold and intelligent in front of any army on earth, I believe. Why is this? It is because for c our great rich free land, the new world, has been looked towards by all other people as a Canaan. Their best smiles, most sacred tears have gone with their best sons and daughters when they come here to make their home and independent future. The American vitality beats the best and nothing can withstand it.

Shortly after the return of theexpedition to Europe in, I heard the late  of , say in a sermon that in  the presence of the Americans so stirred the people that on one occasion he was asked not to speak because the audience collapsed in unmanageable emotions and tears.

The presence of the American soldiers on the battle fields was enough in seven months to dissolve the most stubborn German Fritzie, and awaken them out of the ’s hypnotic grasp.There was something more than mere weapons in the battle lines, – the Yankees had the goods with them, you bet.

And we had the high aim to preserve the best fruits of civilisation which has often been put forth by our great . This, it must not be forgotten, added greatly to the wonderful controlling crushing and awakening powers of our brave soldiers.Lastly, I want to tell you that ever since the bold German spring drive on , last Spring, I have been doing my bit for our great cause and for my country, as have others. We all became greatly alarmed last spring when the Germans sprang on us the super gun bombarding , its aircraft harassing England, and the staunch German soldiers more vigorously than ever pushing on , throwing back great English and French strength; We did not feel sure what would come next as a surprise. I personally lost no time to do my bit. I have in all my life since my  not lifted my hand against any man and have refrained from thinking evil against anybody, but the I decided to put in what powers I possessed, in a way that would shed no blood, to whip the Teutons,- particularly German Barbarism. I am and have been for years, a foremost scientist on “Vital Forces” (Occult Powers), and this was the strongest weapon I could swing. I wrote a letter to  as follows and forwarded a copy to Secretaries  and :

”That same day I wrote a leaflet directed to the U. S. and Allied soldiers and mailed same to the soldiers in France and in our many training camps here when printed. My book “Mastering Vital Forces” was forwarded to  and Secretaries,  and , and thanked for. Further, in the summer, I mailed several hundred booklets, “The Law of Vital Forces” and pamphlets posted therein just as in enclosed booklet to , , and to practically all our training camps in our country, at my own expense. This, I had to do, staying out of my employment and sacrificing my wages, as well as paying all bills out of my own shallow pockets, but I did it cheerfully, because I saw it as my duty and an important one to do my bit in the dark hour.All along the seven months I have written some fifty letters to the dear and Secretaries of  and of the  and I have occasionally received a letter of appreciation of my suggestions, views and teachings.It was necessary to reach the highest in command by my new science because the nature of this science is that its powers go down to subordinates automatically. My science is new in that new lights are thrown on old laws of Vital Forces.I have thus helped to supply the American “goods” in a not small degree by my correspondence and literature and I have put myself to actual work transforming Germanistic Vital Forces and turned them over to the Americans and the Allies. Such is possible because we all know of the wonderful control over vital forces that may be exerted and I have forced myself to a greater mastery because of the great need.

Well, the  and  became sick, so dd the enemy ; the Germans were deserted and broke and if I live until I am a hundred years old, I shall ever be ready with a happy smile and rejoice that I could help so materially to beat the raging Hun and make him subjective to better human feelings again and I shall always regard my letters from the USA War Office, US Navy and from the  as a high hono. in an address before the U. S. Senate, said that it was public pinion (Public Vital Forces) not armies and navies that won the war over Germany. That statement by the US Senator supports my claim that it was the American “Goods” with our soldiers that broke the upperhanded Germans in the Amazingly short time. The American Vital Forces was the goods, precious, you bet. Several other great men have also said that the Germans’ intellect rather than military machine was put down by American mental powers. 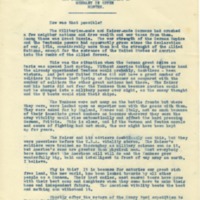