WEDNESDAY, The President prepared the outline of what was later adopted by the Peace Conference as the Prince’s Island Invitation. It was an invitation to all of the factions in Russia to declare a truce, and to send delegates to meet in February to determine whether they could reconcile their views and thus secure representation at the Peace Conference. The President’s suggestion was that there should be no interference with internal affairs of Russia, but that the Allies would do everything possible they could to help the Russian people from the outside. In this connection the French position again was entirely the opposite to that of the American and British, the French advocating armed intervention by allied forces sufficiently strong to overwhelm Bolshevism. The President’s suggestion was adopted and sent broadcast despite the French position. The remainder of the day was devoted to committee conferences. In the evening at eight o’clock the President attended a dinner at the Hotel Crillon, given by Secretary and Mrs. Lansing in honor of the United States Ambassador to Great Britain and Mrs. John W. Davis. The President was very tired and excused himself at ten o’clock. 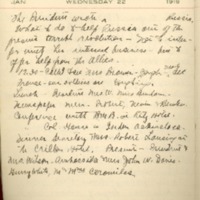 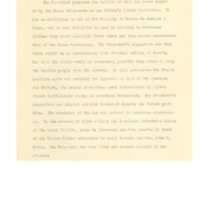