To the President
White Hous

Mr. Davies has advised me of his conversation with you last evening over the tel[e]phone.

Resolution No. 1 is a resolution under which the operators agree that the government agencies; namely, the Secretary of the Interior, the Federal Trade Commission, and the committee on coal production of the Advisory Council of National Defence, shall fix the permanent price of coal f. o. b. the mine. Of course, before this can be done the definite costs of the mine operators must be ascertained. That the Federal Trade Commission is now doing, with the approval of Mr. Peabody and the Secretary of the Interior. When those definite costs are ascertained we can then add a reasonably fair profit for coal at the mine and that, added to the costs, will be the permanent price of coal when thus fixed.

You, of course, know the tremendous interest there is in the nation among all classes of coal consumers with relation to the present speculative price of coal. It seemed to be our duty to get something done, and get it done at once, to end this situation, and Resolution No. 2 was adopted for that purpose. Under that resolution the Secretary of the Interior, the Federal Trade Commission, for which I was acting, and the coal production committee were empowered to fix a tentative maximum price (practically an arbitration) which the operators were to agree, and did agree, should be a tentative maximum price for coal f. o. b. the mines. Of course, no one is required to pay this price. The operators are bound in honor not to ask or charge a price in excess of this.

I am also sending you a statement sent to me from the Interior Department of the effect of our action. The government agencies named in Resolution No. 2 fixed these tentative maximum prices themselves; they simply allowed the operators to suggest what they thought they should be, but I think in every case we reduced their suggestion from at least 50 to 75 cents per ton, and fixed a price, practically in all districts, of $3.00 for mine run coal. In some bituminous districts there is what might be called a semi-anthracite coal, which is domestic lump, egg and nut size. For this they were allowed the price of $3.50.

We recognized when we were fixing these prices that they were high, but the motive was to increase production and throw a large amount of coal on the market as rapidly as possible, and then the matter of supply and demand will reduce the maximum tentative price (in our opinion) very much below the maximum tentative price which we named. In any event, it is going to have a most excellent effect.

The operators were told by me in their meeting that the permanent price would undoubtedly be a lower price than the tentative price. Secretary Lane approved this course most heartily, and I think you will find that our action will be proven to be the wisest course that it was possible to take under the circumstances. If we had allowed these operators to go home and had done nothing, and left the speculative condition of the market as it was, the situation would have continued deplorable.

We should be able to get the actual costs and fix the permanent price by the 15th or 20th of July. We have a large part of that work already done.

I talked this over in a very serious way with Secretary Lane. We realized the difficult situation, but to end an intolerable condition we did what we could.

I think it would be a grievous mistake for any suggestion to be made from any official source, pending the ascertainment of the actual costs of the coal and the fixing of a permanent price, disparaging or criticizing the action already taken. So far as I can see or hear, manufacturers and all classes of operators, with the possible exception of the railroads, realize that what we did will be of great benefit in correcting the present situation. If now the railroads will speed up transportation and help the operators get their coal moved, the price must go down to what would at this time be a fair and normal price.

The great trouble has been due to a feeling in the country that there was no coal, and the fear on the part of public utilities, manufacturers, and others that they would not be able to get coal. The operators can afford to mine to the full under tentative price, and if they can get transportation to market, the supply will more than meet the demand, and the whole situation will be very much benefitted.

With distinguished respect, I am
Yours very sincerely,
John Franklin Fort 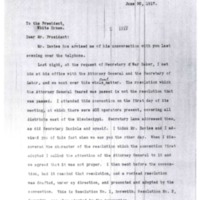