CABLEGRAM Received in the War Department.

From: Paris, To Adjutant General, Washington.

For the Chief of Staff. Confidential.

Paragraph 1. Reference my numbers 69, 74 and 101 and proposed meeting of shipping representatives of Allied powers London September 4th, American representative will be confronted with questions of shipping required by United States and should be strongly supported in demands upon Allies for sufficient commercial shipping to carry out army program outlined your confidential cablegram number 57 if not already assured. Any consideration of less tonnage should be opposed by our representatives. As indicated in former cablegram, the British and especially the French have reached absolute limits of man power and any augmentation their military forces can not be expected. Imperative hasten our organization and training so that we will have the troops contemplated your project in Europe ready for active service by May. Military activity of Allies on land should be strongly reenforced by combined navies and destruction U-boat bases accomplished if possible. High British army officers confidentially condemn waiting policy British Admiralty, and regard British Navy management as extremely inefficient and totally lacking in initiative. In view of gravity of shipping question recommend our government insist upon agressive policy by combined British and American navies. Generally conceded that our energy saved the Allies from defeat. Hence our position in this war very strong and should. Hence to dictate policy of Allies in the future. Allies now fully realize dependence upon our cooperation and we need not hesitate demand both aggressive naval policy and full share all high commercial shipping. Recommend American representative shipping conference be instructed accordingly.

Paragraph 3. Cable from High Commisioner Tardieu to French Prime Minister obtained through confidential sources indicates French pressure to divert United States from program of using all available shipping to land and supply and army in France. He reports difficulty in persuading Secretary of War to send units other than those destined for the Army and that he is obliged Quote act with caution Unquote implying that further demands are to be made on us for men. This constant pressure for units outside of military requirements seems to be reversion to the original plans Aenivelle which contemplated our participation in the war should be to furnish laborers and technical troops. Sugguest such requests receive very careful consideration and that our own military requirements be given full weight. Attention invited to first paragraph this cable on necessity of using shipping for landing and supplying army. With reference to a review memorandum of May 25th from Major General Tasker H. Bliss to Secretary Baker as to deliverate desire of French and English. My observations in France have confirmed impression stated in that memorandum. 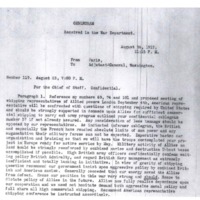